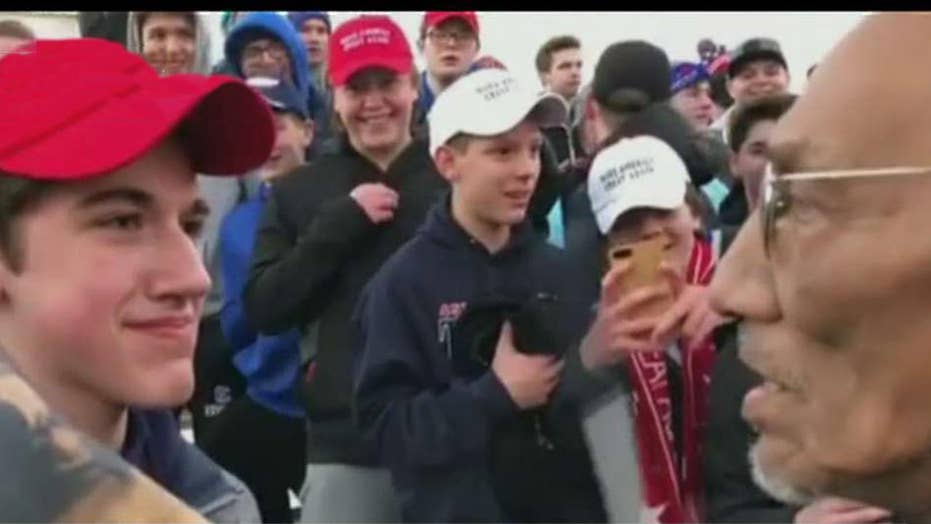 A federal judge in Kentucky Friday threw out a defamation lawsuit filed against The Washington Post by Covington Catholic High School student Nicholas Sandmann and his family over the paper's reporting of an incident between the young man and a Native American man this past January in Washington.

The lawsuit, which was filed in February, sought $250 million in damages and accused the Post of practicing "a modern-day form of McCarthyism" by targeting Sandmann and "using its vast financial resources to enter the bully pulpit by publishing a series of false and defamatory print and online articles ... to smear a young boy who was in its view an acceptable casualty in their war against the president."

Sandmann became the focus of outrage after a video of him standing face-to-face with a Native American man, Nathan Phillips, while wearing a red "Make America Great Again" hat surfaced and rapidly spread online. Sandmann was one of a group of Covington students attending the anti-abortion March for Life in Washington, D.C., while Phillips was attending the Indigenous Peoples' March on the same day.

In a 36-page ruling, U.S. District Judge William Bertelsman noted that the Post never mentioned Sandmann by name in its initial coverage of the incident, referring only to groups of "hat wearing teens." Bertelsman added that "the words used contain no reflection upon any particular individual" and thus could not be constituted as defamation. The judge also ruled that the newspaper used language that was "loose, figurative," and "rhetorical hyperbole" which is protected by the First Amendment.

Sandmann and the Covington students were initially accused of initiating the confrontation with Phillips, but other videos and the students' own statements showed that they were verbally accosted by a group of black street preachers who were shouting insults both at them and a group of Native Americans. Sandmann and Phillips have both said they were trying to defuse the situation.

The lawsuit claimed the Post falsely labeled Sandmann a racist by publishing articles that "falsely accused Nicholas of ... 'accost[ing]' Phillips by 'suddenly swarm[ing]' him in a 'threaten[ing]' and 'physically intimidat[ing]' manner ... 'block[ing]' Phillips path, refusing to allow Phillips 'to retreat,' 'taunting the dispersing indigenous crowd,' [and] chanting, 'Build that wall,' 'Trump2020,' or 'Go back to Africa.'"

Sandmann's lawsuit was based on seven articles and three Tweets that appeared on The Post's website and social media pages after the incident. President Trump supported the lawsuit when it was filed, tweeting: "Covington student suing WAPO. Go get them Nick. Fake News!"

Judge Bertelsman said in the ruling that he accepted Sandmann's contention that "when he was standing motionless in the confrontation with Phillips, his intent was to calm the situation..."

But he noted that Phillips asserted that he was being blocked from passing, and Phillips' opinion was reported by the newspaper.

"They may have been erroneous ... but they are opinion protected by The First Amendment," Bertelsman wrote.

The Sandmann family said they would be asking the appellate court to review the trial court's decision on appeal.

“I believe fighting for justice for my son and family is of vital national importance," said Ted Sandmann, Nicholas' father. "If what was done to Nicholas is not legally actionable, then no one is safe."

“The law must protect innocent minors targeted by journalists publishing click-bait sensationalized news," Todd McMurtry, co-counsel for the Sandmann family, said in the statement. "This is especially true in the current hyper-partisan political environment.”