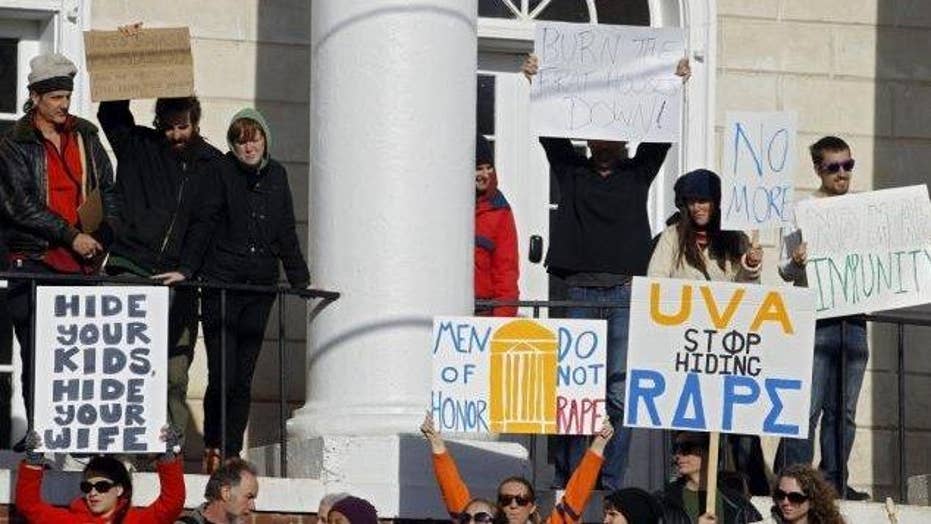 'Jackie' to give sworn deposition in Rolling Stone case

CHARLOTTESVILLE, Va. – The woman who said she was gang-raped at a University of Virginia fraternity house and was the centerpiece of a now-retracted Rolling Stone article must answer attorneys' questions in a defamation lawsuit, a federal judge ruled.

The student identified as "Jackie" in the article has fiercely resisted attempts to answer questions about her claims. U.S. District Judge Glen E. Conrad said Monday she is scheduled for a deposition Thursday at an undisclosed location.

She is being questioned as part of university administrator's $7.5 million defamation lawsuit against Rolling Stone and the article's author. Nicole Eramo, an associate dean of students who had counseled Jackie, says the article cast Eramo as "chief villain." The piece by Sabrina Rubin Erdely also cast the university as indifferent to her claims of a sexual assault.

Eramo's attorneys want to know what the woman told Erdely, who wrote the lengthy article in late 2014 about what Jackie said was an hours-long sexual assault in Charlottesville.

Jackie's narrative did not hold up under media scrutiny and a Charlottesville police investigation found no evidence of an assault Jackie described.

Rolling Stone ultimately commissioned an examination by the Columbia University Graduate School of Journalism. It concluded in a blistering report that Rolling Stone failed at virtually every step, from the reporting by Erdely to an editing process that included high-ranking staffers.

Attorneys for Eramo and Jackie have waged an escalating war of words in briefs over the deposition.

In a March filing, Eramo's lawyers sought to tone down "vitriolic personal attacks" directed at Eramo by Jackie's attorneys.

In turn, Jackie's attorneys criticized Eramo's attorneys for their "scorched-earth" efforts to depose her. Jackie has also resisted questioning because her attorneys have said she would be "re-victimized" as a sexual assault victim.

Besides Eramo's lawsuit, the fraternity filed a $25 million lawsuit against the magazine.

The judge said the deposition would remain confidential. Eramo's attorneys were given up to five hours to depose Jackie.