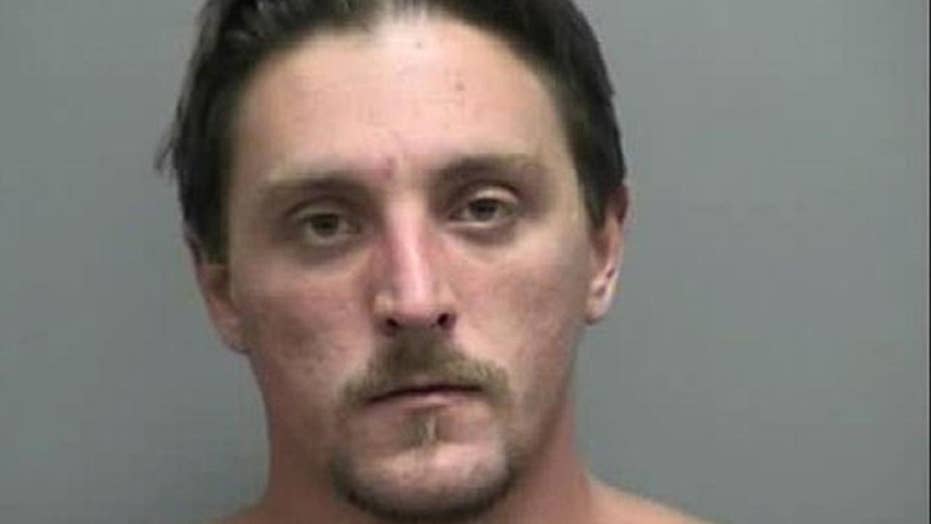 Jakubowski, 32, was found near Readstown in southwestern Wisconsin hiding under a tarp. He was disheveled and appeared to have not slept for days, authorities said. He was found in possession of four handguns, a rifle, a Samurai sword, and a copy of the manifesto he sent to the White House.

His hideout was a desolate farm, Rock County Sheriff Robert Spoden. He said Jakubowski was caught before he could act on any plan for violence.

“Make no mistake what could have happened here is a mass shooting,” Spoden said at a press conference.

The sheriff added: “We are fortunate that whatever his endgame was, he wasn’t able to carry it out.”

The owner of the farm called law enforcement to report a suspicious man on his property. Tactical officers, including from the FBI, moved in to apprehend him.

ATLANTA SHOOTING: ONE KILLED, THREE INJURED BY GUNFIRE ON TRAIN

Officials said Jakubowski was taken into custody without incident. He was taken to the local station and was being interviewed.

He faces arraignment in Madison Federal Court Friday on weapons charges related to the gun shop burglary. Other charges are pending.

Jakubowski was accused of stealing 18 guns from Armageddon Supplies, a store near Janesville, on April 4, torching his car, and then vanishing, Fox 6 reported. The manifesto bearing his name showed his hatred for religion, a long list of grievances against the government, and a desire to carry out unspecified attacks.

The farm's owner, Jeffrey Gorn, told The Associated Press he was driving his four-wheeler when he spotted the camper -- without realizing it was Jakubowski. He said he actually spoke to the man for about an hour and never once felt threatened.

Days after the manhunt began, a separate letter mailed by someone claiming to be Jakubowski threatened unspecified violence on Sunday at churches in the Sussex area, about 25 miles northwest of Milwaukee.

The FBI said Friday that Jakubowski was not the author of that letter.

WTMJ-TV posted 35 pages of handwritten documents to its website that it said were written by Jakubowski, according to a law enforcement source. Rock County Sheriff's Office Commander Troy Knudson said the writings appeared genuine.

The pages posted online were numbered 93 through 160 but skipped almost every odd number, suggesting the TV station received only one side of each page. In them, the writer claimed the government was trying to brainwash its citizens through taxes, religion, and health insurance.

"We the people should be out for these sick minded people belonging to the system! We need to spill their blood!" the document read, going on to say priests and churches controlled U.S. presidents and banks.

The writer stated he would not bring harm or violence to anyone unless "these terrorist gangs continue their terrorism on human life and force my hand to protect and defend the honor and dignity of life!"

More than 150 law enforcement officials had been searching for Jakubowski, who'd had several run-ins with law enforcement, most for traffic violations. Police said he previously resisted arrest and once tried to disarm an officer.

On Thursday, Gov. Scott Walker announced he'd cancel an Easter egg hunt scheduled for Saturday, citing security concerns. On Friday, he said it was back on. He and First Lady Tonette Walker praised law enforcement, saying no one would have to worry over the Easter weekend.

Readstown is about 160 miles west of Milwaukee.