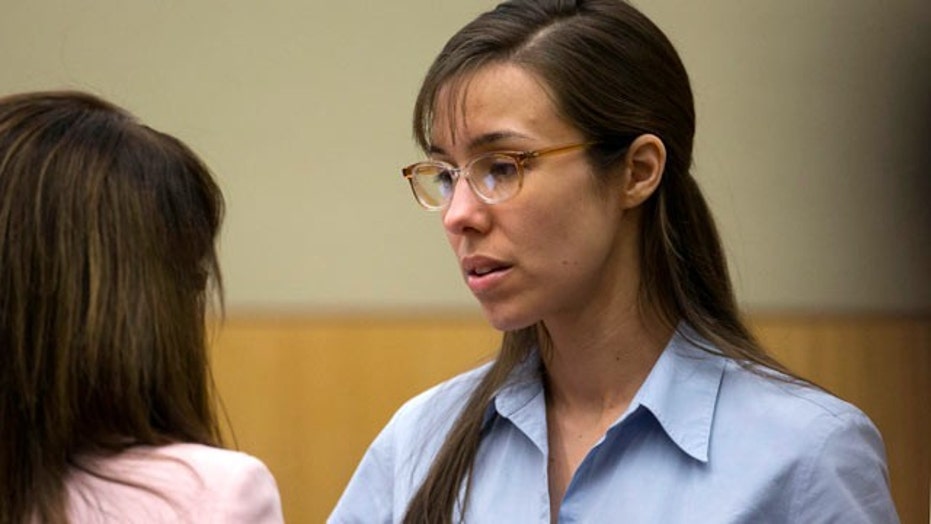 Will prosecutors drop the death penalty in Jodi Arias trial?

PHOENIX – As jurors in Jodi Arias' murder trial filed one by one from the courtroom after a dramatic five months of gut-wrenching testimony and gruesome photographs, three women on the panel cried and one looked to the victim's family, mouthing the word, "Sorry."

The silent gesture toward the loved ones of Travis Alexander offered a glimpse into what was likely a tense few days inside the deliberations room as the jury finally determined it could not agree on whether to sentence Arias to life in prison or execution for murdering her boyfriend.

After about 13 hours of deliberations over three days, the panel gave up.

Judge Sherry Stephens gave a heavy sigh as she announced a mistrial in the penalty phase of the case Thursday. A conference with the judge and attorneys was set for June 20 to determine how both sides want to proceed. In the interim, Stephens set a July 18 retrial date, sending prosecutors back to the drawing board to rehash the shocking case and details of sex and lies to another 12 people.

"This was not your typical trial," Stephens told jurors. "You were asked to perform some very difficult duties."

Jurors declined to comment and left the courthouse. But on Friday jury foreman William Zervakos told ABC's "Good Morning America" that Arias' testimony didn't do her any good.

"We're charged with going in and presuming innocence, right? But she was on the stand for so long, there were so many contradicting stories."

Zervakos said with the prosecutor's aggressive style, that length of time testifying "would be difficult for anybody. I don't think I'd want to sit on the stand for 18 days."

"Is that an excuse? Of course not. Does it factor in the decision that we make? It has to," he said.

The mistrial set the stage for a whole new proceeding to determine whether the 32-year-old former waitress should get a life sentence or the death penalty for murdering Alexander five years ago. Arias stabbed and slashed him nearly 30 times, slit his throat slit from ear to ear and shot him in the forehead in what prosecutors described as a jealous rage after the victim wanted to end their affair and planned to head off on a trip to Mexico with another woman.

Prosecutors have the option to take the death penalty off the table, in which case a new trial wouldn't be necessary and the judge would determine whether to sentence Arias to spend her entire life behind bars or life with the possibility of release after 25 years. Should the state decide to seek death again, jury selection alone could take weeks, given the difficulty of seating an impartial panel in a case that has attracted global attention.

The guilty verdict of first-degree murder would stand, leaving the new panel only tasked with sentencing Arias. However, former Maricopa County Attorney Rick Romley said the case could drag on for several months as the new jury reviews evidence and hears opening statements, closing arguments and witness testimony in a "Cliffs Notes" version of the trial.

Arias, who first said she wanted to die but later changed her mind and pleaded with the jury for mercy, looked visibly upset about the mistrial and sobbed in the courtroom before it was announced. Her family didn't attend Thursday but has been present for much of the trial.

Alexander's family member cried as they left the courtroom without commenting.

Jurors began deliberating Arias' sentence Tuesday and first reported they had failed to reach a unanimous decision the next day. Stephens instructed them to keep trying.

The same jury on May 8 found Arias guilty of murder in Alexander's June 4, 2008 death at his suburban Phoenix home.

Maricopa County Attorney Bill Montgomery thanked the panel in a statement after the mistrial was announced, and noted prosecutor Juan Martinez would have no comment given the pending proceedings ahead.

"We will assess, based upon available information, what the next steps will be," Montgomery said, "and we will proceed with the intent to retry the penalty phase."

For now, Arias will remain in the Maricopa County jail system, where she has spent the past five years. Sheriff Joe Arpaio said Thursday she will be confined to her cell 23 hours a day and not be allowed to give anymore media interviews.

The mistrial came two days after Arias spoke to jurors and pleaded for her life. She said she "lacked perspective" when she told a local reporter after her conviction that she preferred execution to spending the rest of her days in prison.

That same night, Arias gave a series of media interviews from jail, telling reporters about her many fights with her legal team and her belief that she "deserves a second chance at freedom someday."

Arias contends she killed Alexander in self-defense when he became enraged after a day of sex, forcing her to fight for her life.

Her case became a sensation from the beginning as she gave a series of jailhouse interviews following her 2008 arrest in which first she blamed the killing on armed, masked intruders.

Testimony in the trial began in January as the case soon provided endless amounts of cable TV and tabloid fodder, including a recorded phone sex call between Arias and the victim, nude photos, bloody crime-scene pictures and a defendant who described her life story in intimate detail over 18 days on the witness stand.