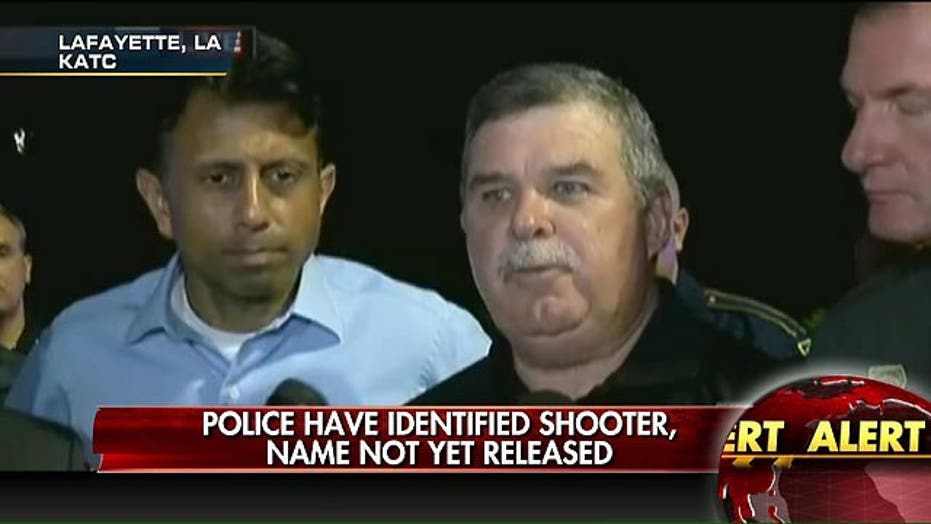 Louisiana Gov. Bobby Jindal praised two teachers who were wounded in Thursday night's shooting at a Lafayette movie theater as heroes, saying they helped alert others to what was going on.

During a press conference late Thursday, Jindal said one of the teachers leapt across her fellow educator's body to shield her from a hail of bullets.

"Her friend literally jumped over her, and in her account actually saved her life," Jindal said. "If she hadn't done that ... that bullet, she believed it would have hit her in the head."

The second teacher then managed to pull the theater's fire alarm to start an evacuation.

"Even though she was shot in the leg, she had the presence of mind to pull the fire alarm to help save other lives," the governor said. "A lot of folks in that situation would just be thinking about themselves."

The teachers have been identified by colleagues as Jena Meaux and Ali Martin. Both are described as being from New Iberia, a town of about 30,000 people approximately 30 miles southeast of Lafayette. It's not clear which woman did what during those terrifying moments inside the movie theater, but Jindal said one of the woman had already been released from the hospital, while the other was still being treated.

Cammie Maturin, the president of the Iberia chapter of the Louisiana Association of Educators, told The Times-Picayune that she had started a GoFundMe page to raise money for the women's medical expenses. As of 5:30 a.m. ET Friday, it had raised $1,053 of its stated $10,000 goal.

"It's all about helping them because they helped a whole lot of people." Maturin said. "It could have been a lot worse."