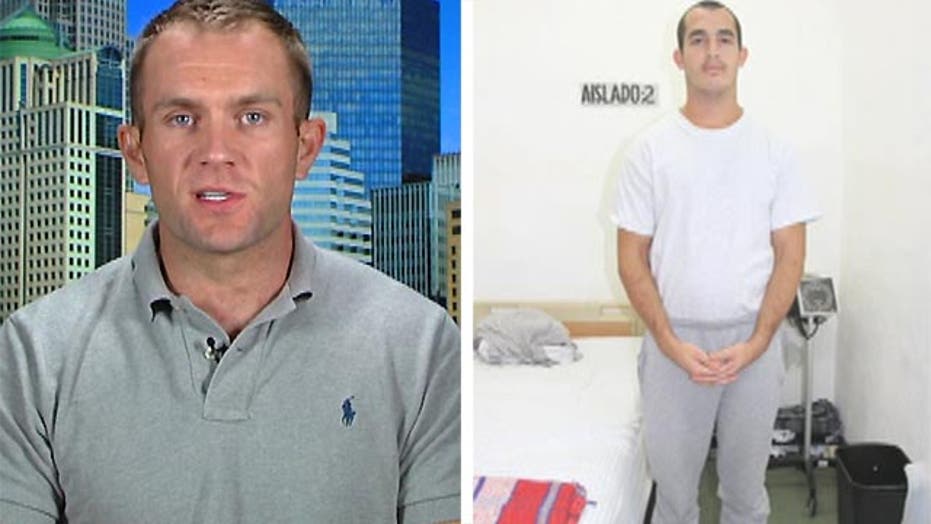 Marine who served beside Sgt. Andrew Tahmooressi says he claims prison officials chained him to a bed, treated him like the 'worst gun smuggler' #MarineHeldinMexico

A friend of the U.S. Marine being held in a Mexican prison on gun charges has compared his plight to that of a prisoner of war, telling Fox News’ Greta Van Susteren that Sgt. Andrew Tahmooressi told him he had been beaten and chained to a bed by Mexican authorities.

Mark Podlaski said on “On the Record with Greta Van Susteren” he spoke with Tahmooressi on the phone last week from the prison where he is being held, and Tahmooressi told him “very disturbing details” about how he had been treated.

Tahmooressi was arrested March 31 after accidentally crossing the border with weapons in his vehicle.

"This is from his mouth, what I'm telling you right now is what he endured as an American citizen and a U.S. Marine," Podlaski told Van Susteren, "was that he was chained to his bed for so long that when they finally released him at the end of that four weeks he couldn't even walk, he was crippled from such bad muscle dystrophy and joint pain and not being able to fire the muscles in his body."

Podlaski said it is absurd that Mexico, which he pointed out is supposed to be an ally of the U.S. and receives U.S. aid, would treat an American citizen this way.

“This is like POW, Vietnam, you know prisoner of war camp type stuff,” said Podlaski, a Marine himself who served with Tahmooressi in Afghanistan.

Bart Santos, who has been working with Tahmooressi’s family as a private investigator since his arrest, also told FoxNews.com that the torture was inflicted before Andrew Tahmooressi’s mother went to the media.

Santos, who learned about the torture from Podlaski, said the Marine was kept in uncomfortable restraints and beaten by prison guards.

“They were coming in and beating him regularly,” Santos said.  He said Tahmooressi at times was kept naked and “beaten like an animal.”

The new revelations on Tahmooressi’s plight came after the Marine had his first hearing in the case. Before the hearing, Tahmooressi fired his attorney Alejandro Osuna for allegedly instructing him to lie.

"Andrew kept insisting he wanted to change it, but our concern was that if he mentioned he had been in Tijuana about six times prior to his detention (which seems to be the case), his story would have been less credible," Osuna wrote in the email, obtained by FoxNews.com.

Tahmooressi wishes to "set the record straight" after "being directed to misrepresent the situation," Hunter spokesman Joe Kasper told FoxNews.com.

Tahmooressi was instead represented by a court-appointed, temporary lawyer at the Wednesday hearing.

After the hearing, Osuna spoke to reporters and confirmed he had been fired. He said the legal change prevented Tahmooressi's accusers, two Mexican Marines and two border officials, from testifying because the new legal team was not prepared to question them. He said Tahmooressi did not give a statement and denied he had instructed his client to lie.