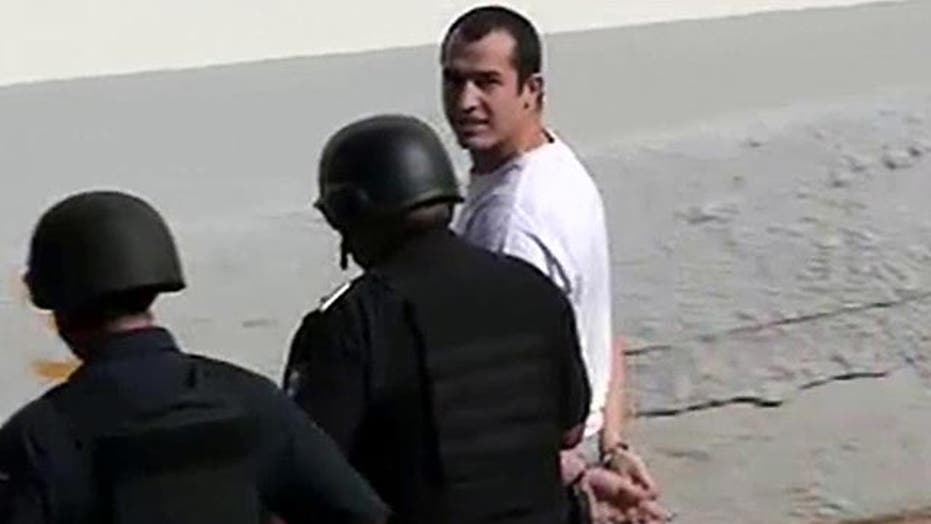 Jailed Marine in Mexico back in court

On Day No. 127 of imprisonment, Marine Sgt. Andrew Tahmooressi entered a federal court in Tijuana and faced four border officials who were involved in his March 31 arrest on weapons charges.

Following the approximately five-hour hearing, Defense Attorney Fernando Benitez told Greta Van Susteren on Fox News' "On the Record" that he felt his client was "a little more upbeat" and that he was "growing more optimistic as evidence is entered into his case."

Benitez asserts Tahmooressi's civil rights were violated because he was not provided a translator to adequately explain why he was being arrested. He also alleges the 26-year-old Marine was held at the port of entry, where he crossed from San Ysidro, Calif., for more than eight hours before being transported to the federal police headquarters and formally charged with the Mexican federal crime of bringing weapons and ammunition used by the military into the country. He was not charged with weapons trafficking.

"The technical result of that would be that any and all evidence derived from that illegal time frame, the first eight hours ... could not be used to predicate the judge's verdict on it," Benitez told Fox News. Mexico does not have jury trials, and Tahmooressi's fate is in the hands of a single jurist -- Judge Victor Octavio Luna Escobedo.

Benitez told Van Susteren he thought the case was "going very well so far" but said it could be three months or longer before the judge makes a final ruling.

Jill Tahmooressi, the Marine’s mother, sat in the hall outside the hearing room but Benitez came out frequently to provide updates.

"The testimony of the border agents and soldiers definitely validated Mr. Benitez's contention that Andrew's civil rights were violated because they held him for eight hours without charging him, providing a translator, or contacting the state department," she said.

The judge also allowed her to sit with her son for 20 minutes after the hearing.

"Of course he's disappointed," she said.

"Mr. Benitez told him to be realistic in that the process will likely have to run its course and he won't be released any time soon."

After the hearing, Benitez spoke to media in Mexico about the two customs agents who testified Monday.  Benitez had hoped to use their testimony to demonstrate that they violated customs protocol by denying Tahmooressi his civil rights during his detainment on the night of March 31.  Instead, the agents testified that they indeed followed customs protocol that night.

While it appeared their testimony did not reveal any smoking gun, it did give Benitez the opportunity to attack the customs process.  He said that eight hours of detainment with no access to a translator, lawyer or consulate official should not be considered normal and alleged that customs protocol is in violation of Mexico's constitution.

Benitez also said that Mexican customs officials are stonewalling on the handover of surveillance tape from that night.  He said the judge has ordered it handed over as evidence, but Benitez claimed they have denied the judge's order, calling it "confidential information."

Tahmooressi left the courthouse under heavy guard and was returned to his prison facility in Tecate Monday night.

Jill Tahmooressi said her son, who suffers from combat-related PTSD after two harrowing tours of duty in Afghanistan, is struggling to remain optimistic for a quick resolution to the ordeal. The case could languish for months, according to lawyers.

Complicating Tahmooressi's plight at the time of his arrest was that he had military-grade weapons and ammunition, as defined by Mexican statute. Tahmooressi’s lawyer maintains the weapons in the truck where there because he had recently moved from Florida, and had all of his possessions, including the legally-purchased weapons, in his vehicle when he was stopped at the border.

On July 8, Hunter and Rep. Lee Terry, R-Neb., sent a letter to Escobedo, imploring him to take into consideration the circumstances surrounding Tahmooressi's accidental entry into Mexico.