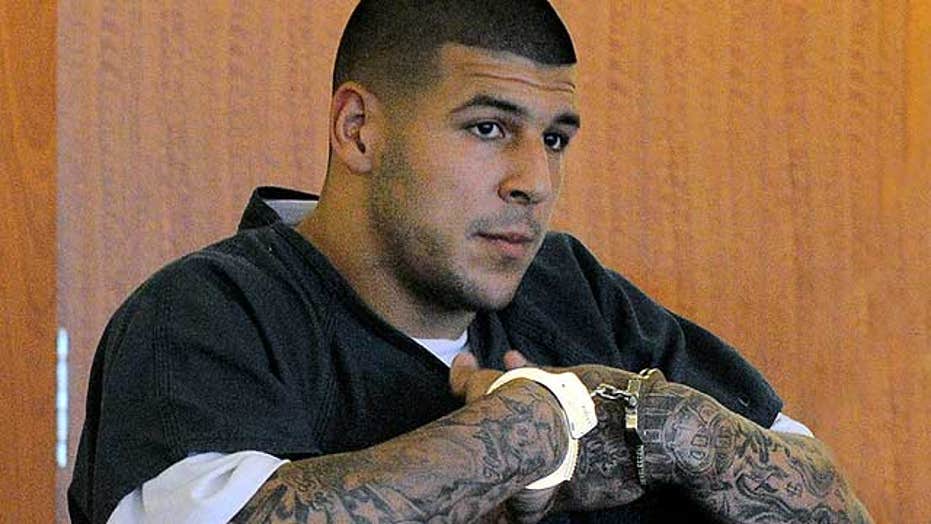 Former New England Patriots tight end Aaron Hernandez was one of quarterback Tom Brady's favorite targets on the football field, but he could become the target of a dangerous fellow inmate looking to boost his reputation by taking on the prison VIP and possible gang member, according to some penal experts.

The Boston Herald reports that jail officials in Dartmouth are now scouring Hernandez’s vast array of tattoos to determine if the 23-year-old fallen star has any gang links.

“We’ll be looking at his tattoos to see if there are any symbols that affiliate with gangs,” Bristol County Sheriff Thomas Hodgson told the newspaper. “We have to always be vigilant around security and not place him somewhere where there are rival gang members.”

And if it’s proven that the former fourth-round pick does have gang ties, Hernandez is in danger, according to a Los Angeles gang expert.

“Hernandez could be a very appealing target for someone who wants to make a reputation for himself,” Jorja Leap, an adjunct professor of social welfare at UCLA, told the newspaper. “The sheriff needs to be extra careful with someone like Hernandez.”

Leap said she has studied Hernandez’s tattoos and determined that they appear decorative, emphasizing the so-called “sleeves” of tattoos covered both of his arms. What’s unseen, however, could be critical, she said.

Gang tattoos are often “crude,” Leap added, and direct, such as “LK” for Latin Kings or devil horns for the MS-13 gang.

“It could also be a gang saying, like 'smile now, pay later,'" said Leap, who added that jail officials will spot the affiliated gang tattoos if they exist.

Hernandez, in a photograph obtained by the Daily Mail, is seen crossing his arms to form an “X,” an apparent reference to the Bristol Bloods street gang in Connecticut, where he attended high school. The picture was taken six years ago when Hernandez was 17 years old, the Mail reports.

Hodgson, meanwhile, told the Herald that Hernandez, who recently purchased a sprawling mansion in North Attleboro after signing a five-year, $40 million contract, is undergoing an “adjustment” period with his newest digs: a 7-by-10-foot cell.

Hernandez was cut by the Patriots hours after he was charged with murdering 27-year-old Odin Lloyd in North Attleboro last week. He has pleaded guilty and remains held without bail at the Bristol County House of Correction.