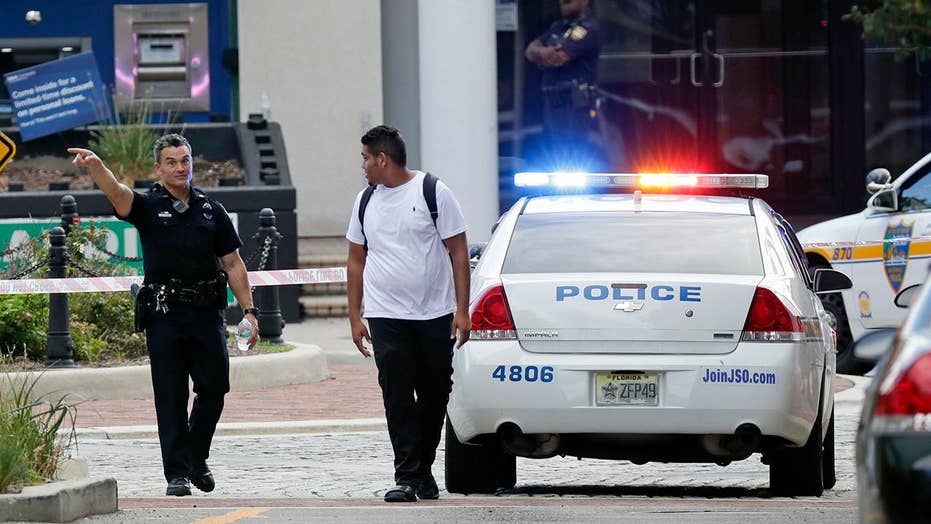 Gun control debate heats up ahead of state's primaries; Lauren Blanchard reports on the fallout from the deadly video game tournament shooting.

The gunman who opened fire on a "Madden NFL 19" tournament in Jacksonville, Florida, on Sunday was hospitalized previously for mental illness, according to court records.

Divorce filings from the parents of 24-year-old David Katz of Baltimore showed that as a teenager he was hospitalized twice in psychiatric facilities and was prescribed anti-psychotic and anti-depressant medications, The Associated Press first reported Monday.

Katz, a competitor at the gaming event, had two handguns and extra ammunition inside the restaurant where the competition was taking place, officials said at a news conference Monday afternoon.

The divorce filings showed that Katz's parents disagreed deeply on how to care for their son. Katz's father claimed his estranged wife was exaggerating symptoms of mental illness as part of the couple's long-running and acrimonious custody battle. They divorced in 2007.

Katz legally purchased his firearms —  .45 caliber and 9mm handguns — in Baltimore, Maryland, Jacksonville Sheriff Mike Williams told reporters. He bought them within the past month from a licensed dealer, officials said.

"One of [the guns Katz used] did have like an after market laser sight that attaches to the trigger guard," Williams added.

Police said there was no indication Katz planned his shooting prior to Sunday. He had lost in the tournament earlier in the day.

The suspect shot and killed two people at the event inside the Chicago Pizza restaurant of The Jacksonville Landing before turning the gun on himself, police said. Katz also wounded 10 others, all of whom are expected to recover from their injuries.

Williams said it was clear Katz "targeted other gamers" at the competition.

Police, however, "have yet to determine a concrete motive" in the case, which remains under investigation by several agencies. Both Katz's mother and father "have so far been fully cooperative" with the FBI.

Eli Clayton, 22, of California, and Taylor Robertson, 27, of West Virginia, were identified by Electronic arts, the company which develops "Madden," as the victims who were fatally shot on Sunday.

"Their deaths are an inconceivable tragedy, and we offer our deepest sympathies to their families, to those injuries and everyone affected by this," the statement from EA read. "Many of us at EA knew Elijah and Taylor well, and their positive, competitive spirit and respect for other players were evident to everyone."

"They earned the admiration of all who watched them compete, and we will miss them greatly," EA said of Clayton and Robertson.