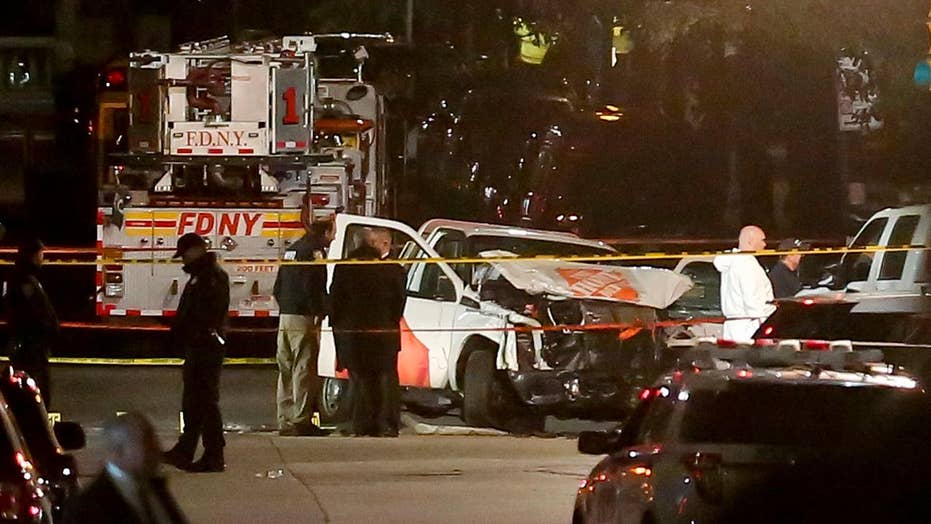 David Lee Miller reports from Manhattan on what is known about suspect Sayfullo Saipov.

An Uzbekistan man who left notes pledging allegiance to ISIS on Tuesday carried out a deadly truck attack in New York City — just days after ISIS released propaganda emboldening its followers to carry out Halloween attacks.

The suspect, Sayfullo Saipov, 29, allegedly barreled a Home Depot truck down a popular bike path in Manhattan, killing at least eight people and injuring 11 others. Officials say he then crashed the vehicle into a school bus, before jumping out and screaming “Allahu akbar” — “God is great” in Arabic — with pellet and paintball guns in his hands. Authorities also found Saipov’s handwritten notes pledging loyalty to ISIS.

But there may have been warning signs prior to Tuesday's assault.

Saipov "popped" up in connection with a handful of individuals who were known to law enforcement when investigators ran his name through their databases after Tuesday's attack, two sources told Fox News. It is not clear whether these investigations were limited to the New York City area or included Florida, where Saipov had lived. One source said Saipov had “close ties...[to] the group he rolled with [who] was known to law enforcement.”

ISIS had been encouraging its followers to carry out Halloween attacks with propaganda from the terror group showing a graphic with a blood-splattered machete and Tuesday's date. The artwork was believed to have been done by a French ISIS supporter and included an image of the Eiffel Tower with the words “Enjoy their gathering” and “Terrorize October 31” written in French.

SITE intelligence group, which monitors terror activity online, also highlighted a recent photo taken by an ISIS supporter near the scene of Tuesday's attack; but it remained unclear if there was a connection between that photo and the rampage.

The terror group’s leader, Abu Bakr al-Baghdadi, recently emerged after multiple rumors of his death, urging followers to "intensify the successive attacks," despite the terror group's losses on the ground in Syria and Iraq.

There has been no official claim of responsibility by the terror group, but known ISIS accounts — what counterterrorism analysts call “leadership” accounts — are applauding the attack and using the hashtag "#the slap of terrorism."

Even if authorities determine the attack to be ISIS-inspired or directed, the terror group is unlikely to publicly claim the rampage. ISIS typically doesn't claim terror attacks in which the attacker lives. Police shot Saipov, however, he was rushed to the hospital with injuries that were not considered life-threatening.

ISIS has recruited many Uzbek citizens to its cause, with several of the supporters who travel to Syria conducting suicide missions. The estimated number of Uzbek citizens fighting in the ranks of ISIS is estimated to be about 200 people in Uzbekistan, according to the Muslim Board of Uzbekistan. However, the number of Uzbek jihadists exceeds more than 1,500, when other terror groups such as Imam Bukhari Jamaat, Tawhid wal-Jihad and the Islamic Movement of Uzbekistan (IMU) are added.

Sayfullo Saipov is accused of killing eight and injuring 11 in a terror attack in New York City. (St. Charles County Department of Corrections)

Uzbekistan is the most populous country in Central Asia and shares a border with Afghanistan, Kazakhstan and Turkmenistan.

Saipov is the second Uzbek national in New York connected to terror in just the last four days. Abdurasul Hasanovich Juraboev, a 27-year-old Uzbek citizen, was sentenced to 15 years for conspiring to provide material support to ISIS. Juraboev, who lived in Brooklyn, posted a threat on an Uzbek-language website saying he wanted to kill then-President Barack Obama in an act of martyrdom on behalf of ISIS in 2014. He then told investigators that he believed in ISIS’ agenda and wanted to travel to Syria to join ISIS fighters, the Justice Department said in a news release. He also told officials he planned to plant a bomb on Coney Island if he couldn’t travel to Syria or was ordered by the terror group to carry out an attack on American soil.

Vehicle attacks by ISIS supporters have grown in popularity due to the relative ease of acquiring a vehicle as opposed to building a bomb or purchasing a weapon. An Al Qaeda affiliate in Yemen first called for vehicle attacks in an online Al Qaeda magazine, calling trucks the “ultimate mowing machine” to take “down the enemies of Allah.” ISIS has claimed responsibility for at least five truck attacks since the deadly incident in Nice, France in July 2016, with two more assaults carried out by self-proclaimed ISIS supporters.