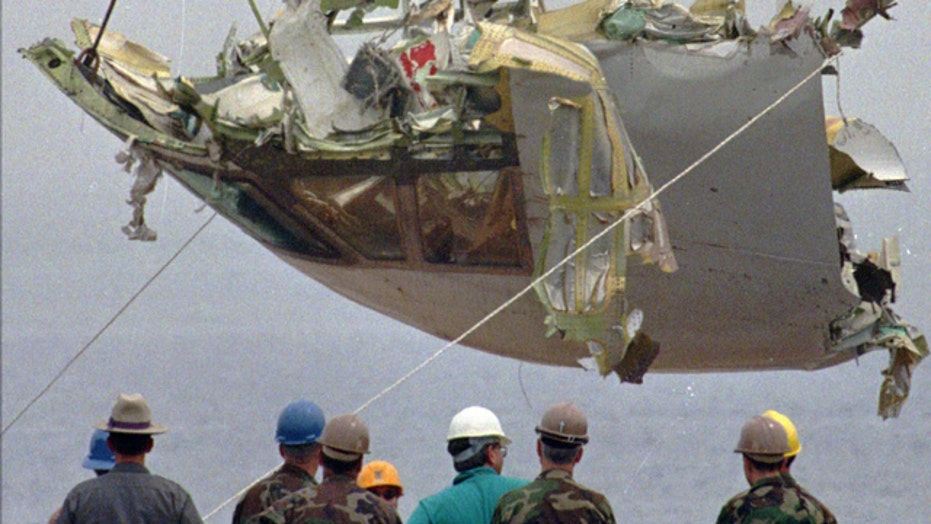 Debate over likelihood of missile strike

A handful of aviation experts, including a number of investigators who were part of the original probe of TWA Flight 800, have come forward in a new documentary to say evidence points to a missile as the cause of the crash off the coast of Long Island 17 years ago.

The New York-to-Paris flight crashed July 17, 1996, just minutes after takeoff from JFK Airport, killing all 230 people aboard. In the weeks that followed, the plane was reassembled in a hangar from parts retrieved from the sea. But the cause of the crash was not identified immediately, and after authorities said the crash was caused by static electricity ignited fuel fumes, many skeptics cast doubt on the theory. Adding to the controversy were multiple eyewitness accounts of a fireball going up from the ground and hitting the plane before it went down, accounts which the FBI dismissed at the time.

The half-dozen investigators whose charges will be fleshed out in a documentary set to air July 17 - the anniversary of the crash - say they were never allowed to get at the truth. But they are confident a missile brought down the plane.

"We don't know who fired the missile," said Jim Speer, an accident investigator for the Airline Pilots Association, one of a half-dozen experts seeking a new review of the probe. "But we have a lot more confidence that it was a missile."

The group is comprised of people who worked for the National Transportation Safety Board, TWA and the Airline Pilots Association, all of whom have since retired. All six say that the evidence shows the plane was brought down by a projectile traveling at a high speed.

“It all fits like a glove,” said Tom Stalcup, a physicist who is considered one of the foremost independent researchers and participated in the documentary, said during a press conference on Wednesday. “It is what it is and all the evidence is there.”

Hank Hughes, a retired senior accident investigator for NTSB, said probers were not allowed to seek answers once the FBI took over the crime scene. "We just want to see the truth come out," Hughes said. "We don't have hidden agendas. The only thing we are looking for is the truth."

Speer, who says he found explosive residue on a part from the right wing which also had three holes, agreed.

“It’s obvious that the truth was not allowed to be pursued," said Speer. “A majority of people working in that hanger did not feel as if the evidence was properly being handled.”

The NTSB said it will review the petition.

"All petitions for reconsideration are thoroughly reviewed, and a determination is usually made within about 60 days," spokeswoman Kelly Nantel said. "While the NTSB rarely re-investigates issues that have already been examined, our investigations are never closed and we can review any new information not previously considered by the board."

"Investigators took great care reviewing, documenting and analyzing facts and data and held a five-day hearing to gather additional facts before determining the probable cause of the accident during a two-day board meeting."