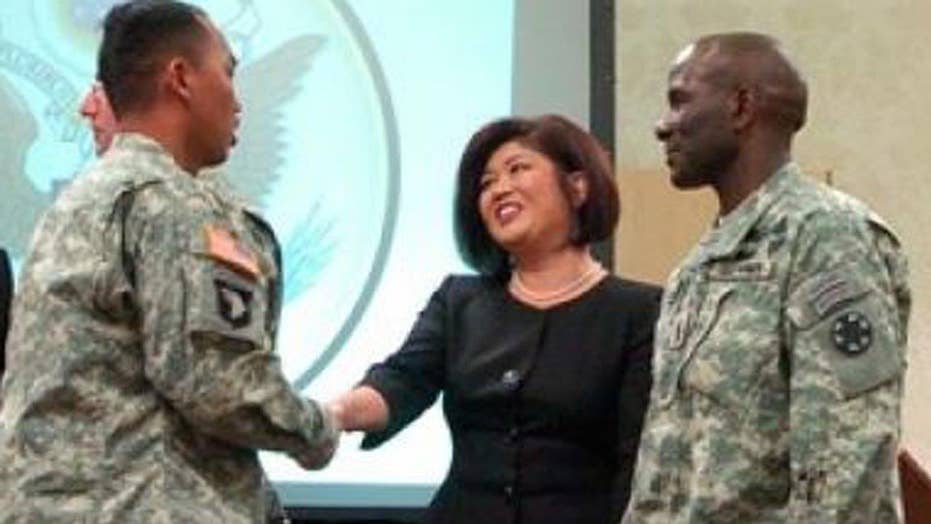 A U.S. immigration official blamed in a federal report for barring law enforcement agents from a suspect in the San Bernardino terror attack has been nominated for a prestigious agency award – but her bosses in Washington refuse to say what she did to earn consideration.

Irene Martin heads the San Bernardino U.S. Citizenship and Immigration Services office, where last December, she allegedly blocked five armed Department of Homeland Security agents from the man authorities say supplied the firepower in the deadly attack a day earlier. Although an Inspector General's report found she acted improperly, and then lied to investigators, FoxNews.com has learned she has been nominated for the Secretary’s Award for Valor.

“To give Irene Martin an award for valor is insulting to all the prior awardees – the agents and officers who truly displayed valor and risked their lives to save someone else,” said Jessica Vaughan, director of Policy Studies for the Center for Immigration Studies, a Washington-based research institute.

Department of Homeland Security officials declined to say what Martin did to merit consideration for the award, which is described as “the highest departmental recognition for extraordinary acts of valor by an employee or group, occurring while on or off duty” and is reserved for “those who have demonstrated extraordinary courage in a highly dangerous, life-threatening situation or emergency under extreme stress and involving a specific act of valor, such as saving another person’s life or property.”

Past valor award recipients include government employees who have saved people from burning cars, sinking ships and weapon- wielding assailants.

FoxNews.com was told the information could only be released in response to a Freedom of Information Act request, which has been lodged.

Martin was blamed for touching off a turf war that came to light when whistle blowers told Senate Homeland Security Chairman Ron Johnson, R-Wisc., about the tense, Dec. 3, 2015 incident. It came a day after Tashfeen Malik and Syed Farook killed 14 and wounded 22 in the terror attack. Authorities believe Enrique Marquez, who had an appointment with Martin's staff when the authorities showed up, gave them the guns used in the attack.

The potential award for Martin was announced on a conference call from high-ranking USCIS officials in Washington during a staff meeting held at the San Bernardino office where Martin also was present, sources told FoxNews.com. The  USCIS and the agents who had been sent to detain Marquez are part of DHS.

The nomination from Martin’s superiors was stunning to staff members because it was announced just days after a June 1 DHS Inspector General’s report found Martin improperly hindered the work of five armed agents on site just 24 hours after the attack.

Johnson held two Senate hearings about the incident in May and requested that the Inspector General’s investigation.

The report noted DHS agents were sent to the USCIS building to arrest Marquez, who authorities were frantically trying to track down the day after the terror attack at an office Christmas party. Marquez, it turned out, had not shown up for his scheduled appointment at the USCIS building, but Martin kept agents waiting 30 minutes before meeting with them, and another hour before she turned over the USCIS file on Marquez.

Marquez was eventually arrested and is being held on charges related to supplying the guns as well as marriage fraud.

Martin also lied to the Inspector General’s investigators, according to the June 6 report, about her role in what has been characterized as a turf battle. Lying to federal investigators is a felony and can result in dismissal and criminal charges.

Arlen Morales, spokesman for the DHS Inspector General, would not confirm whether his agency had made a potential criminal referral involving Martin’s testimony to the US Department of Justice, saying the Inspector General does not discuss any ongoing work.

Vaughan suspects the award could be a further politicization of the Dec. 3 incident, which left DHS law enforcement officials furious and at a disadvantage as they tried to close in on any accomplices to the Dec. 2 terror attack.