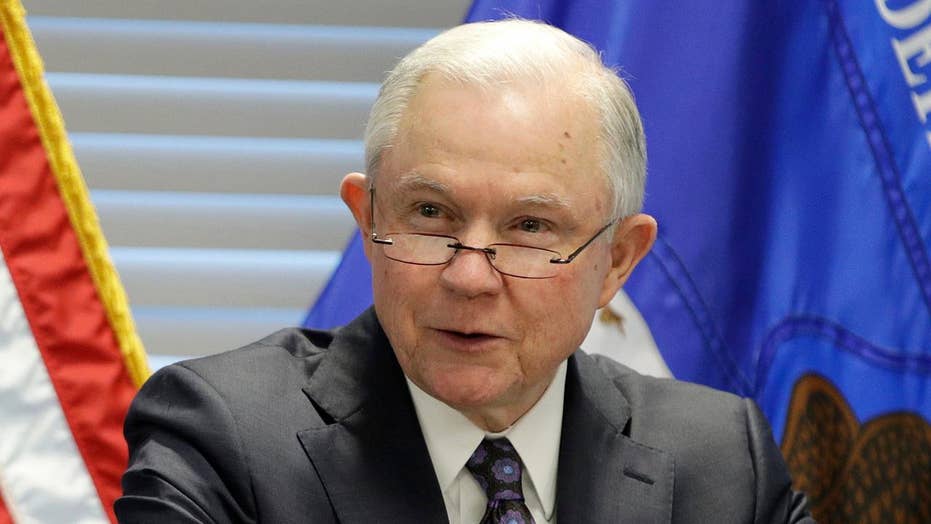 It is still pitch black Tuesday morning when a dozen agents from Immigration and Customs Enforcement gather in a parking lot in northern Los Angeles, the largest and arguably most strident of America's roughly 300 sanctuary cities.

"This is target No. 1 and this is two," said ICE field director David Marin, pointing to rap sheets and photos of the five criminal aliens targeted for arrest that day.

The first is Carlos Sanchez, a 25-year-old Surenos gang member with a decade-long criminal history, including multiple felony convictions. All night, an ICE agent surveilled his apartment to make sure he didn't leave.

In places like Los Angeles, which has said it would refuse to cooperate with ICE, federal agents continue to target criminal immigrants – though they do so on their own.

On Tuesday, minutes after 6 a.m., Sanchez walked to his pickup truck in the alley to head off to a construction job. In seconds, three ICE SUV's and six agents boxed him in. Once in handcuffs, agents patted him down and checked his tattoos. Hours later, Fox News spoke to him inside an ICE detention facility, where he was being processed for deportation.

In places like Los Angeles, which has said it would refuse to cooperate with ICE, federal agents continue to target criminal immigrants – though they do so on their own. (Fox News)

"I feel like this is unfair right now," he said, his ankles still bound by steel cuffs. "I'm getting my life back together, trying to do everything right. Back then I was young and stupid. Now I'm 25 years old."

"What Trump is doing is just insanity. You know, just because you got misdemeanors...little cases here and there,” he said. “He doesn't see the fact that you're trying to straighten up."

The city and county of Los Angeles each voted to appropriate $3 million in public funds to help defend illegal immigrants like Sanchez, including those with criminal records.

The city and county of Los Angeles each voted to appropriate $3 million in public funds to help defend illegal immigrants. (Fox News)

California also agreed to set up a multimillion dollar legal defense fund while proposing to make it a 'sanctuary state,' which would prohibit not just police, but also the 58 county sheriffs who run the jail system from even communicating with ICE regarding the whereabouts or release dates of most criminally charged and convicted illegal immigrants.

Sanchez supports a sanctuary state effort, saying that under Trump "everybody is going to have to live in fear, you know?"

After Sanchez, the Fugitive ICE teams move a few miles east, where they knock on the door of Eduardo Jiminez, a 28-year-old Mexican who spent the last 20 years in the U.S. Convicted of alien smuggling, theft, and 2 DUI's, Jiminez opens the door without a shirt. When he sees the ICE agents, he bolts out the back door and jumps a fence. Agents give chase, and catch him four blocks away.

"It's true that I can be here without papers," he tells me later during processing. "Yeah I work. Everybody works. There are a lot of people same as me."

Los Angeles is the largest and arguably most strident of America's roughly 300 sanctuary cities. (Reuters)

Do they blame Trump, I ask.

"Yeah, that guy messes up everything."

"Police chiefs across the nation believe that enlisting local police to enforce immigration law is a bad idea," DeLeon told reporters last month in Los Angeles. "Because we stood up to the Trump administration with an aggressive defense of our immigrant communities, Attorney General [Jeff] Session has had to narrow his definition of a sanctuary city."

In other areas of law enforcement – terrorism, drugs, gangs, human trafficking – federal and local police work together. In California, ICE is on its own. (Reuters)

Session currently has California and nine other jurisdictions under a legal review, judging whether their lack of ICE cooperation violates a federal statute requiring local police to communicate with ICE, especially with immigrants already in custody for criminal offenses.

In other areas of law enforcement – terrorism, drugs, gangs, human trafficking – federal and local police work together. In California, ICE is on its own.

"We are going to do our job no matter the obstacles by the city state or county put in front of us," Marin said. "We are going to continue to get these criminal aliens off the street and hopefully back to their countries."