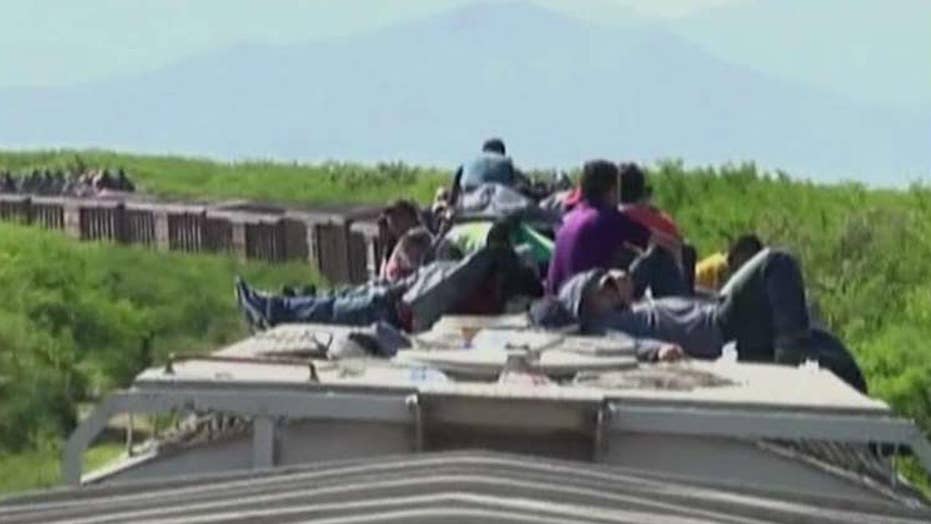 DOJ facing backlash over use of term 'illegal alien'

One of three men charged with using a gun stolen from a police officer to kill a San Francisco man last month reportedly was an illegal immigrant who was being monitored by U.S. immigration officials.

Data taken from Erick Garcia Pineda’s electronic monitor confirmed the 18-year-old was in the city’s Mission District on Aug. 15 when 23-year-old Abel Esquivel was murdered in the street, NBC Bay area reported Thursday.

The station, citing unnamed sources, said Garcia-Pineda was wearing a monitoring bracelet at the time of the killing. The suspect was claiming asylum in the U.S., saying he was being harassed by MS-13 gang members, the sources added.

Immigration officials did not respond to NBC Bay Area’s requests for comment and it was not immediately clear where Garcia-Pineda originated.

Weapons stolen from the cars of police officers also have been used in other high-profile Bay Area killings in recent years, such as the shooting of Kate Steinle in 2015 and Antonio Ramos in Oakland in 2016, The Associated Press reported.

The complaint alleges Garcia Pineda and 24-year-old Jesus Perez-Araujo took the gun and ammo from Cabuntala’s car just days before the shooting.

“The fact that it was stolen out of a car probably means that it was not secure,” said Kwixuan Maloof, an attorney representing Perez-Araujo.

The two men, alongside Daniel Cruz, 18, appeared in court for an arraignment hearing Thursday with Spanish interpreters, the San Francisco Examiner reported.

San Francisco is known as one of America's most sheltering "sanctuary city," shielding illegal immigrants from being reported to the federal government.

Police used data linked to the tracking bracelet to connect Garcia-Pineda to five robberies and two other shootings, according to NBC Bay Area. Garcia-Pineda, along with the two other defendants, pleaded not guilty to all the charges facing them Thursday, including Esquivel’s murder. They are being held in a county jail without bail.

“This is a spree over a week where there were separate, different violent offenses,” Assistant District Attorney Heather Trevisan said in court, the Examiner reported.

Esquivel had just gotten out of work at a market when he was shot, SFGate reported. The website, citing a complaint filed by the district attorney’s office, said Perez-Araujo was driving around with Garcia Pineda and Cruz looking for targets to rob. The trio – all city residents – held up three people around midnight and ran into Esquivel around 2 a.m., with Garcia Pineda accused of firing the fatal bullet, the complaint said.

Police union President Martin Halloran said the veteran officer didn’t know his gun was missing until after the fatal shooting, and was “devastated” to hear the news, The Associated Press reported.

"Well, we have to investigate," Police Chief William Scott told NBC Bay Area. "I mean it would be very, very irresponsible and premature for me to say what’s going to happen with the officer until we have the facts."

Lariza Dugan Quadra, a friend of Esquivel, said he recently starting working with youth at the Central American Resource Center.

“CARECENSF empowers and responds to the needs, rights and aspirations of Latino, immigrant, and under-resourced families in the San Francisco Bay Area — building leadership to pursue self-determination and justice,” the facility says on its website.