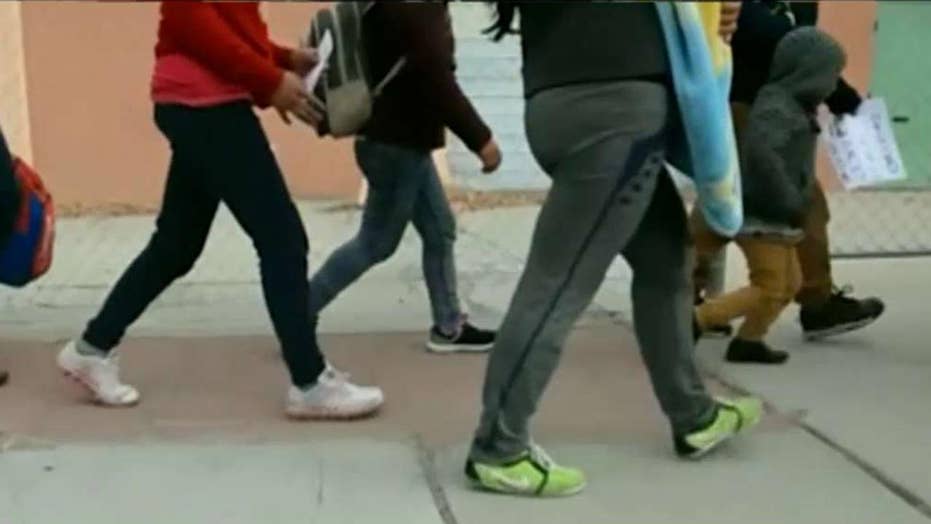 U.S. Immigration Customs and Enforcement blames the courts and Congress for their inability to 'detain and remove families with no legal basis to remain in the U.S.'; national correspondent William La Jeunesse reports from Los Angeles.

More than 500 migrants were released Wednesday onto the streets of Texas and New Mexico, U.S. Immigration Customs and Enforcement said, as the government struggles to detain illegal immigrants amid an influx of Central Americans trying to cross the U.S.-Mexico border.

The release on Wednesday followed days of other mass releases by the agency in order to prevent migrant families from being detained longer than allowed. On Christmas Day, the agency released 186 migrants and another 400 were set free two days prior, Las Cruces' KVIA-TV reported.

More releases are expected Thursday, said Ruben Garcia of the Annunciation House, a homeless and refugee shelter in El Paso.

After a similar release Sunday, ICE blamed "decades of inaction by Congress" for limiting its ability to remove families who are in the U.S. illegally.

“To mitigate the risk of holding family units past the timeframe allotted to the government, ICE has curtailed reviews of post-release plans from families apprehended along the southwest border,” the statement read. “ICE continues to work with local and state officials and NGO partners in the area so they are prepared to provide assistance with transportation or other services.”

The agency typically coordinates with local shelters to make sure there is space for them to stay. But U.S. Rep.-elect Veronica Escobar, D-Tex., told the Associated Press that ICE officials dropped people off at the bus station after Annunciation House said it didn't have enough space.

Garcia blamed the agency's practice of releasing migrants on a Customs and Border Protection policy change from late October. The policy states that if ICE has “more people to drop off than local shelters and agencies can receive and house, then ICE will drop those migrants off in the street.”

Nonprofit groups cited by El Paso's KDBC-TV said they were more prepared than in previous weeks because ICE notified them in advance -- something which, according to Rep. Beto O'Rourke, D-Tex., hadn't happened in previous weeks.

The boy, identified by Guatemalan officials as Felipe Gomez Alonzo, died in U.S. custody at a New Mexico hospital on Christmas Eve after suffering a cough, vomiting and fever, authorities said. The cause of death is under investigation, as is the death Dec. 8 of another Guatemalan child, 7-year-old Jakelin Caal.