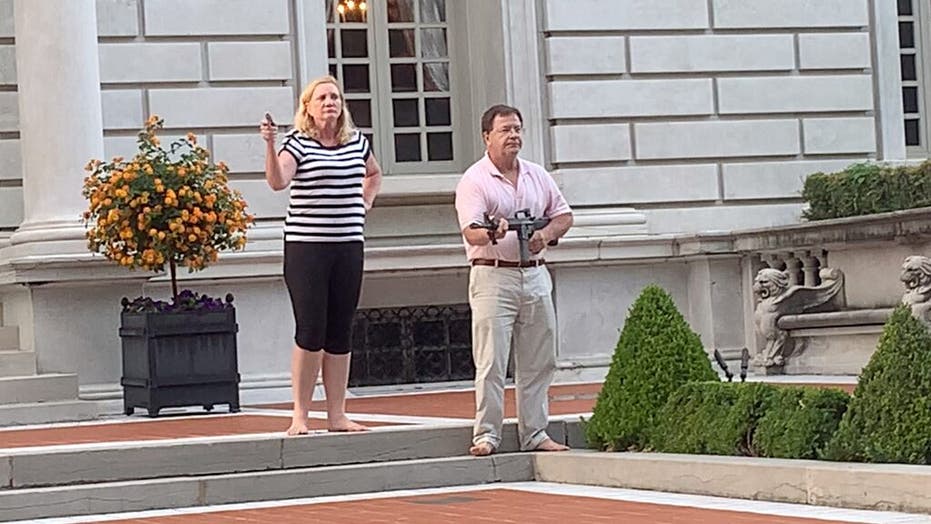 St. Louis prosecutors have declined to prosecute nine people charged with trespassing on the private property of a gun-wielding couple who pointed weapons at them during a confrontation.

In a statement to Fox News, deputy city counselor Michael Garvin said Tuesday that prosecutors investigated each of the cases through the review of multiple videos, property documents and interviews.

"After consideration of all factors, the city counselor determined that prosecution is not warranted against these particular individuals," Garvin said. "Having reached that conclusion, all charges were refused."

A couple draws their firearms on protestors as they enter their neighborhood during a protest against St. Louis Mayor Lyda Krewson in June. Nine Black Lives Matter protesters were issued citations for trespassing in connection with the incident but prosecutors announced Tuesday that the charges were refused. (DANIEL SHULAR/via REUTERS)

Mark and Patricia McCloskey, residents of the neighborhood face one felony count of unlawful use of a weapon. The couple made headlines when Mark McCloskey was seen armed with an AR-15 rifle and his wife with a semiautomatic handgun during a confrontation with marchers passing by their home en route to St. Louis Mayor Lyda Krewson's house.

Conservative and gun rights groups voiced support for the couple, who made an opening night speech at the Republican National Convention after the media attention from the June incident.

Their lawyer, Joel Schwartz, told the St. Louis Post-Dispatch that the decision to drop the charges doesn't mean the demonstrators were not trespassing.

"It was clearly trespassing and the McCloskeys were clearly within their rights to do what they did,” he said.

Missouri Gov. Mike Parson, a Republican, has said he will pardon them if they are convicted.