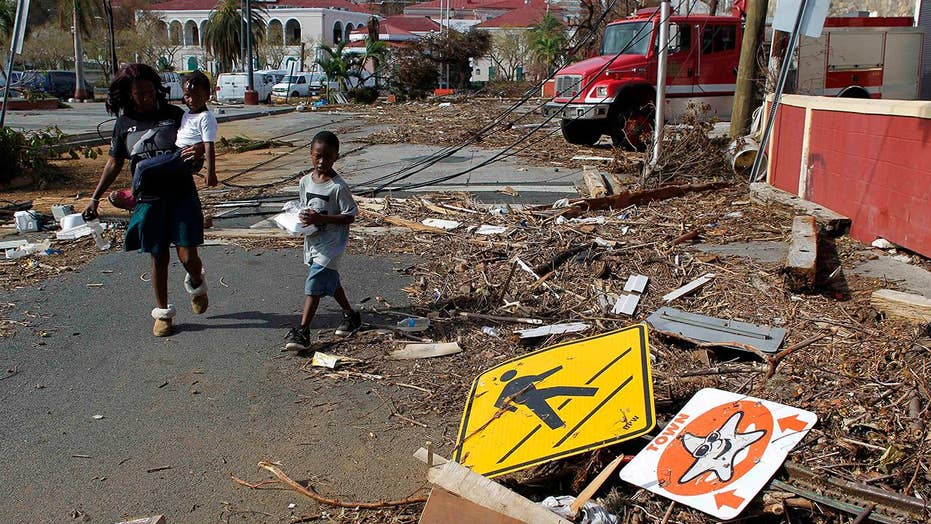 Rain is coming this weekend to Saint John, the smallest of the U.S. Virgin Islands, but protection from it is scarce.

Hurricane Irma barreled through the Caribbean last week, hitting especially hard Saint Thomas and Saint John in the Virgin Islands, as a powerful Category 5 storm – one of the strongest ever recorded in the Atlantic Ocean.

As it left and continued on toward Puerto Rico and Florida, it took with it chunks of boats, communication lines, pieces of buildings and personal mementos. It left scattered debris and people’s futures.

Nicholas Jabour stayed on Saint John along with his wife and 10-week-old son in what they believed was a concrete building that would keep them “reasonably sheltered.” They endured a relentless battering from the rain as the pressure inside the apartment was too great to keep the window closed.

“We dealt with water being pelted through this small crack [in a window] and the screams of the storm as the room was darkened by just the pure amount of wind being driven by our protected window,” Jabour described.

But sometime during the storm, part of the ceiling collapsed and storage units on the top of the building were whisked away by the storm’s winds.

Jabour and his family needed to evacuate – during the peak of the hurricane – as the walls literally came crumbling down around them.

Along with his neighbors, Jabour and his family ran outside on a walkway that doubled at that moment as a wind tunnel, funneling debris, water and air conditioning units. Jabour’s wife clutched her son to her chest, protecting him with her body and a simple zip-up sweatshirt, until they found shelter in a dry cleaning business.

HURRICANE IRMA ‘DEVASTATES’ US VIRGIN ISLANDS, BUT THEIR SENSE OF COMMUNITY IS UNWAVEREING

Jabour’s apartment was flooded. The ceiling caved in. But still, he said he’s one of the “lucky” ones.

His neighbors’ apartments sacrificed windows, walls and doors to the hurricane.

“We were lucky, prepared and had many advantages others didn’t,” Jabour told Fox News from Vermont, where he evacuated following the hurricane. “So realize this is one of the ‘better’ tales.”

Alesia Georgiou, a Saint John resident, remembers the moment when she knew she was going to die. Along with five friends and a handful of cats and dogs, Georgiou waited out the storm in a masonry house in the Fish Bay neighborhood, on the southwestern side of the island.

As the storm’s tantrum hit the island, Georgiou helplessly watched as steel shutters bolted into concrete easily abandoned the building they were tasked to protect. Hurricane glass shattered from the pressure. An entire window blew away.

“This probably happened in the space of half a second, but I felt like it was in slow motion, and I was paralyzed with fear,” Georgiou told Fox News. “In this moment and for four hours after while the storm raged, I was sure we were going to die. I went from hyperventilating to a bizarre sense of dizziness, and the extreme drop in barometric pressure probably contributed to that.”

Georgiou is still on the island, and while the winds have died down and glass is no longer shattering, the picture she paints of the near future for residents like herself is somber.

“In this moment and for four hours after while the storm raged, I was sure we were going to die."

“In the morning, we saw that many neighboring houses had been obliterated. Some were partially intact but had fallen down the hillside,” she described. “What had been a beautiful blue bay 12 hours before was now a brown mess with a couple of boats barely visible where they had sunk.”

“There is not a single leaf left on a single tree. The island looks like it has been through a nuclear holocaust,” Georgiou said.

As rain is forecasted for Friday and into the weekend, many buildings don’t have roofs to protect people – if they even have walls at all. Tarps are no longer available to patch broken roofs, and the wait list is just too full. Water rations have dwindled and there’s only a “meager” supply of canned goods, she said.

Georgiou’s shelter needs “literally everything,” from bedding to toiletries.

And to further complicate the situation, relief efforts are stymied as Irma left marinas obstructed, the mail system obsolete and the Saint Thomas airport out of commission.

FEMA has provided nearly 578,000 meals, 115,000 liters of water, 13,600 sheeting covers, 150 rolls of blue tarps and 36 generators to the islands of Saint John and Saint Thomas, it said Friday. But Georgiou and other residents said it’s not enough.

"There is not a single leaf left on a single tree. The island looks like it has been through a nuclear holocaust."

Georgiou said Saint John residents have received more assistant from private individuals, particularly from Saint Thomas or Puerto Rico, than the government, keeping in line with the island’s nickname of Love City.

Carly Long, a local artist, is one of those people. A painter who studied photography under Anne Bequette, owner of STJ Creative Photography, Long is using her own talents in an effort to give back to her home and mentor.

Long is selling her paintings and giving all proceeds to the Love for Love City Foundation, started by country music star Kenny Chesney whose home in Saint John was also destroyed.

“With everything I’ve learned from [Bequette], I know we’re going to rebuild,” Long told Fox News. “Everything will work out as it’s supposed to.”

Other Saint John residents, including some who evacuated, are selling t-shirts and bumper stickers online in an effort to raise money for rebuilding efforts. Several residents have expressed gratitude for Chesney’s foundation and encouraged loved ones to donate to it or the Red Cross.

Caribbean Sea Adventures, a boat charter company from nearby Saint Croix – the largest of the U.S. Virgin Islands that was spared much of Irma’s wrath – volunteered its staff, boats and resources as its been running supplies to Saint John and Saint Thomas.

Michelle Griffith, a Caribbean Sea Adventures employee, praised the generosity of those who have donated supplies for them to take to the sister islands.

Jabour has no idea when he’ll be able to go home. Before his family evacuated, they took supplies to his employer’s son, who had opened up his home to the family and others with unsafe places to stay on the island. Everything else was donated to others.

“We literally left our figurative lives to others,” he said. “This isn’t a short term and quick fix. It will take months if not a year for the island to find its feet again – even longer for things to return to ‘normal.’ I want people to know all the help now is fantastic but please stick with us for the long term.”

“Saint John is not just a place of beauty but very much a place of love and community, it deserves our continued support,” he added.

When the radio announced the departure of Irma, Georgiou and her friends cried. But when the jingle of a local tire service began to play, they danced.

It will be some time before Saint John, with an economy that relies strongly on tourism and hospitality, will be back on its feet. But until then, Saint John residents will continue to fight for homes and rely on one another.