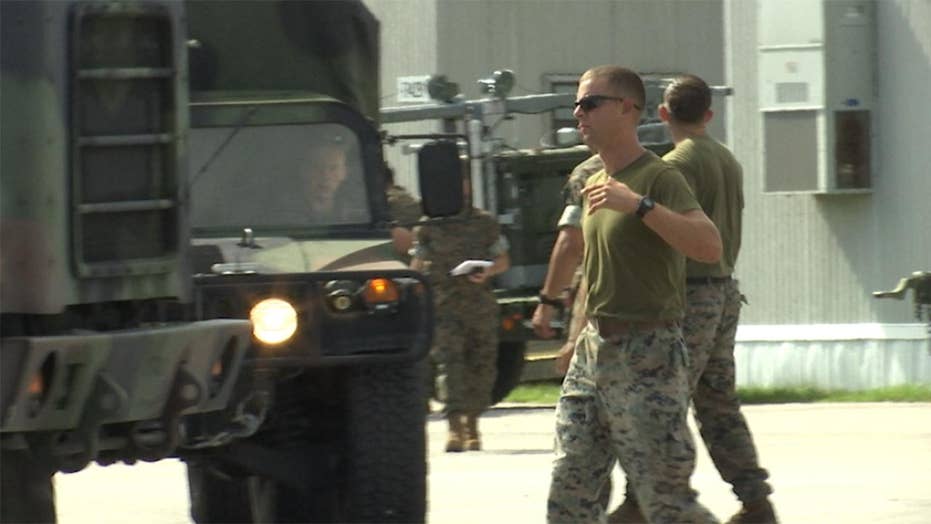 The largest Marine Corps base on the East Coast opened its gates to anyone with Department of Defense IDs, as Florence takes aim at the Carolinas.

JACKSONVILLE, N.C. – The largest Marine Corps base on the East Coast opened its gates to anyone with Department of Defense IDs and their families Wednesday afternoon, as a monster hurricane barrels toward the Carolinas — Camp Lejeune potentially at its bullseye.

Hurricane Florence is expected to slap the area with winds above 100 mph and rainfall measured in feet.

Camp Lejeune Brigadier General Julian D. Alford said in a statement that the base has endured “countless destructive weather events over its 77-year history,” and he expects the structures to continue withstanding tough conditions.

When asked if the base is well-prepared for a potentially Category 4 hurricane, Chief Warrant Officer 4 Aaron Courts responded defiantly, “Oh, yes, ma’am, we’re marines and we’re ready to go.”

He said the Destructive Weather Task Force at Camp Lejeune does exercises at least once a year for these scenarios. “Today, this is just a real-world action,” Courts added.

While the focus is on base, the team is prepared to respond to emergency incidents in the community — but only if local authorities formally request their assistance.

The 156,000-acre base, including 11 miles of beachfront, boasts a team of Marines, large military vehicles, power generation capability to filter and distribute water and emergency shelters.

Camp Lejeune’s three prepared shelters — on school grounds and in a fitness center — have the capability to hold 1,500 people.

“In literally 24 hours, we’ve taken this from a gym where people were playing basketball yesterday, to a place that can house up to 620 people,” said 1st Lt. Charles Strauss, who is in charge of the shelter in the Wallace Creek Fitness Center.

Strauss toured Fox News around the facility, pointing out separate rooms for people with special medical needs and a place to address injuries.

While there is a limited supply of blankets, pillows and cots, Alford assured in a statement, “Everyone who needs shelter will get it.”

“The general has the keys to a number of brand new five-story barracks that he is willing to open should we reach capacity, so he is not going to be turning anyone away who comes here with a DOD card seeking shelter,” said Nat Fahy, the director of communications at Camp Lejeune.

While making their cots, veterans Marty Rabello and Douglas Renegar expressed relief to have a nearby, reliable option to weather the storm.

“I have full confidence in the ones who are making the decisions to house us here … or I wouldn’t be here,” Renegar said.

Hundreds of cots fill a gymnasium on Camp Lejeune's base. (Fox News)

Though, military officials caveated, this is not a five-star hotel. The spaces will be packed, and the air conditioning likely will be cut off at some point for safety reasons.

Guests should not expect to be fed within the first 72 hours and are encouraged to bring toiletries and games, along with provisions.

“We’re going to try and make this as comfortable as a place as possible,” Strauss said. “But comfort isn’t our priority. Our main concern is safety and facilitating as many people as we can take in as possible.”

Strauss assured, as long as Florence continues to rein terror over North Carolina’s coast, the shelters will remain open.