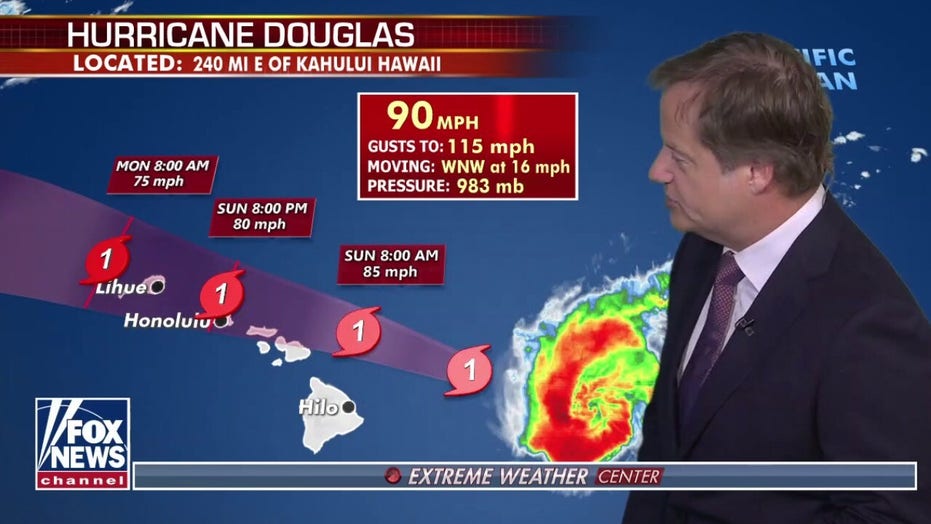 The first hurricane this season in the Central Pacific edged closer to Hawaii on Sunday, threatening to bring high winds, rain, and storm surge to the islands.

The storm located is about 90 miles east of Kahului, Hawaii.

A hurricane warning is in effect for the islands of Kauai and Niihau, Maui, as well as Oahu, home to the state’s largest city, Honolulu, with the storm beginning to impact the island as early as the late morning.

The Big Island is under a tropical storm warning.

"On the forecast track, Douglas will pass dangerously close to the main Hawaiian Islands on Sunday," the NHC said.

A morning view of the city of Honolulu on the island of Oahu, is seen Sunday, July 26, 2020. (AP Photo/Eugene Tanner)

Douglas weakened Saturday to a Category 1 hurricane as it approached Hawaii, but officials warned people should not be lulled into complacency.

“We know that it is weakening as it approaches, but it still will have a significant impact on each island,” Hawaii Gov. David Ige said at a news conference.

The NHC warned that besides high winds, a storm surge of up to 3 feet above normal tides are possible as well as large waves and heavy rainfall. Up to 5 to 10 inches of rain is possible from Maui west to Kauai, with the greatest threat in higher terrain, which could result in flash flooding and landslides.

“Douglas is continuing a gradual, slow, weakening trend, which in itself is good news, but the bad news is that this hurricane is going to come very close to the islands even as it’s weakening,” said Robert Ballard, the science and operations officer at the Central Pacific Hurricane Center. “And we do expect significant impacts as it makes its point of closest approach or possible landfall as it comes through.”

Ige said residents should already have their 14-day emergency supply kit in place, but because of COVID-19, he encouraged people to add masks, hand sanitizer and sanitizing wipes.

On Oahu, 13 shelters will be open at 9 a.m. on Sunday, well ahead of the hurricane impacting the island, anywhere from midday into the evening.

Diane Peters-Nguyen with the Red Cross told KHON2 that all staffers at shelters will go through coronavirus screenings and said cleaning practices are in place.

“With any of the high-traffic areas in the shelter, they’ll be doing extra cleaning to make sure that you know there’s no contamination,” she said.

State health department officials contacted each of the 625 people who were currently in isolation or quarantine as of Friday because they are either COVID-19 positive or have been in contact with someone who is. Every one of those indicated they would shelter-in-place and not seek refuge at a hurricane shelter.

Hawaii has some of the lowest coronavirus infection rates in the nation, but COVID-19 numbers have been rising in recent weeks.

“If there is a problem, we have alternative accommodations for those people, so [those seeking shelter] should feel good about the fact that they’re not going to be mixed in with known cases,” State Health Director Dr. Bruce Anderson said Saturday.

President Trump issued an emergency declaration for Hawaii because of the hurricane, directing federal assistance to supplement state and local response efforts.

Hawaiian Airlines canceled all Sunday flights between Hawaii and the U.S. mainland and also between the other islands.

Residents across the islands were preparing for the worst. Maui resident Joshua Fernandez was busy boarding up his grandmother's house.

“This is really just the second time. All the other hurricanes she said, she didn’t really care,” he told KHON2. “It’s kinda scary because this is the first time we might actually get hit by a hurricane.”

Kahului resident Eddie Perrells, who lived through Hurricane Iniki when it hit Kauai, said he made sure to get enough supplies, board up, and make sure everything is tied up outside.

“Anything can happen," he told Hawaii News Now. "The neighbor’s stuff can fly in my yard and break my window. I just want to make sure my family is protected."