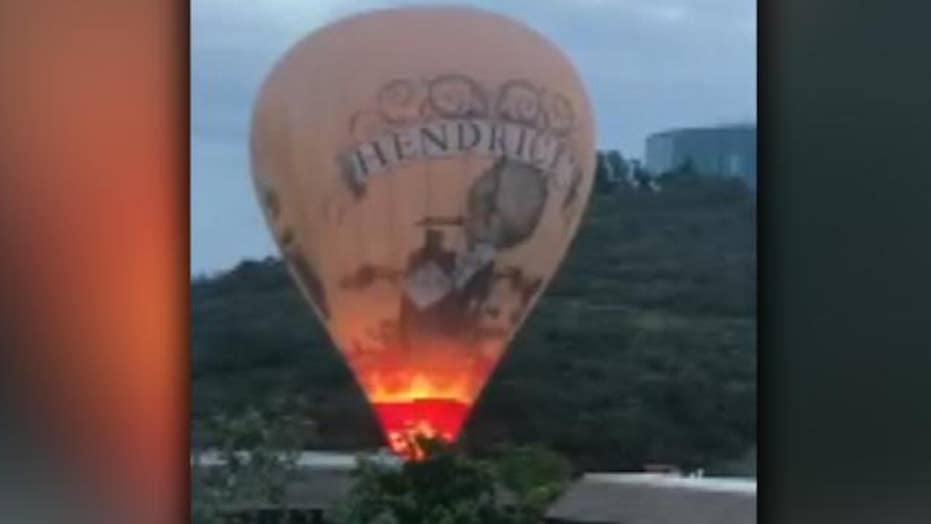 Residents of a San Diego neighborhood got quite the surprise on Sunday when a hot air balloon made a crash landing just down the street.

The San Diego Police Department told FOX5 San Diego that 14 passengers and a pilot were aboard the balloon at the time, but no injuries were reported.

The incident took place just before 7:30 p.m. in Rancho Penasquitos in the northeast part of San Diego. The balloon had plenty of fuel left, and authorities said it was unclear why the pilot was forced to make a landing.

Videos taken by residents show the balloon coming to rest on a hillside near an apartment complex. Another video shows the moment the balloon crashed into a fence before landing.

A hot air balloon made a crash landing in the Rancho Penasquitos area of San Diego on Sunday. (Jordan Jennette via Storyful)

Joseph McGhee told NBC7 he was having a barbecue with his friends when the balloon went down.

"The wind shifted, I guess, and they kind of got caught in the mountains over here," he said.

HOT AIR BALLOON CRASHES AND CATCHES FIRE BUT NO ONE INJURED

McGhee said the balloon's basket ended up stuck in the brush, and began to tip over when it started to ascend again.

"Me and my friends ran down here and tried to anchor it until police and firefighters came to help," he told NBC7.

The National Transportation Safety Board is now investigating the incident.