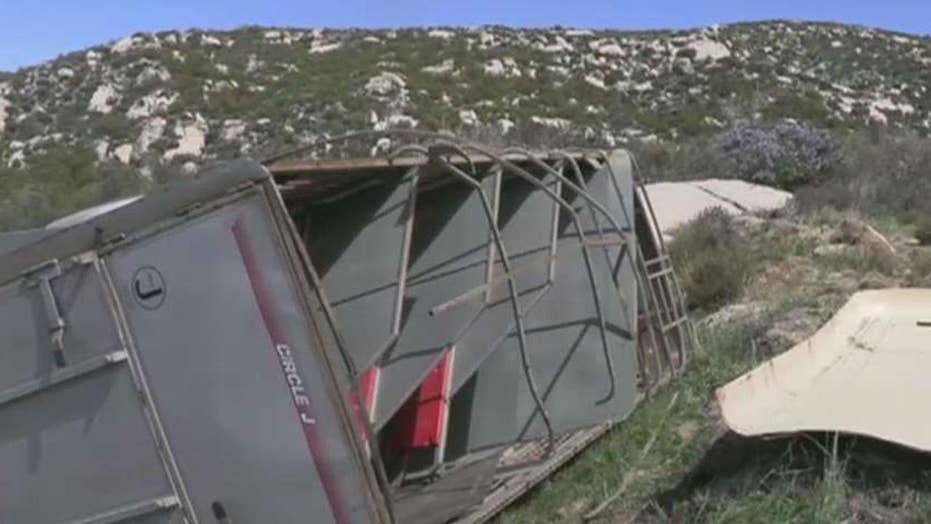 A horse trailer carrying at least 18 people who entered the country illegally overturned Saturday on a Southern California highway just north of the border with Mexico, authorities said.

Several people inside the trailer were hurt in the crash near the town of Campo, with injuries described as moderate and minor. The Times of San Diego reported that two had tom be airlifted to hospitals. Six patients were hospitalized, The San Diego Union-Tribune reported.

A witness told the California Highway Patrol that the two-axle trailer being hauled by a pickup truck began to fishtail and eventually tipped onto its right side along northbound Interstate 8.

A pickup truck pulling a trailer crashed in Southern California on Saturday, injuring more than a dozen people who may have been in the U.S. illegally, according to reports. (OnScene.TV)

Several people scrambled from the trailer after the crash and many ran away into the mountainous area, The Times said. No horses were inside.

After a search of the area authorities were able to round up most, if not all, involved, said Border Patrol Agent Eduardo Olmos. CHP and Cal Fire reported 18 individuals, while Border Patrol said there were 19; the reason for the discrepancy wasn’t immediately known.

Border Patrol officials said the driver of the pickup had not yet been identified and it was unclear if he or she was in custody.

Olmos said it was not yet known where the people made illegal entry into the United States.