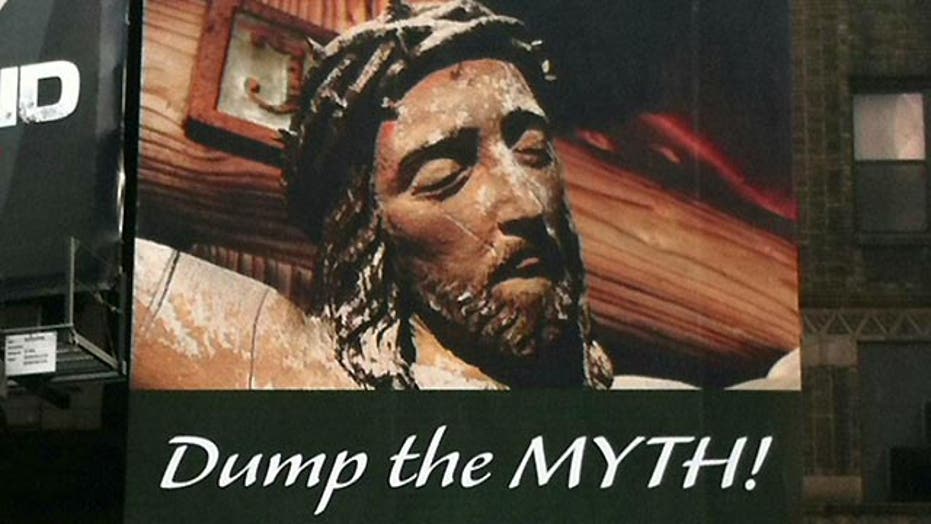 Do you need to be religious to enjoy the holiday season?

Just as midtown Manhattan comes alive with Christmas cheer, festive window displays and Salvation Army bell ringers trying to channel holiday generosity to the needy, an atheist group has a message for the masses teeming into Times Square: Jesus is a myth.

With a picture of Santa Claus above another image of Jesus Christ, the sign, sponsored by New Jersey-based American Atheists, urges passersby to "Keep the Merry!" and "Dump the Myth!" Attacks on Christianity from the group have become routine, and in the bustling heart of America's busiest city, most folks don't even waste a shrug on the sign. But some took notice, and did not approve.

David Silverman, president of American Atheists, had an answer, though not one likely to please the faithful.

“Most Christians are really atheists who feel trapped in their family’s religion," Silverman told FoxNews.com. "They need not be Christian to enjoy the holiday season.”

Silverman said a private donor paid more than $25,000 to have the billboard posted above a nightclub in the crossroads of the world for one month, ending Jan. 10, 2013.

“We chose Times Square because it is a place where people go to shop and be festive, which has nothing to do with religion,” Silverman said.

Lamar Outdoor, the advertising giant that leased the space to Silverman's group, said it wasn't the company's place to censor the message.

"We felt as long as it's not misleading that it's their First Amendment right," Lamar spokesman Hal Kilshaw said. "We think it's their right to have their message heard," he said, adding that they have not received any complaints over the Times Square billboard yet.

The ad is the latest in holiday-themed billboards put up by the group every year. In 2011, American Atheists posted a variety of ads as part of a “Myth” campaign in three states with images of Santa, Jesus, Greek god Poseidon, and the Devil with the phrase, “37 million Americans know MYTHS when they see one.”

The Catholic League has battled it out with Silverman's group in the past, even posting opposing signs on each end of the Lincoln Tunnel in 2010. But Catholic League spokesman Bill Donohue said Silverman went too far this year.

"This year it's different," he said. "This is vile. When you depict Jesus on the cross with a crown of thorns, this is exploitative. We as Christians never harass, intimidate or insult atheists. But they can't seem to say, 'We simply disagree with you.' They have to insult us."