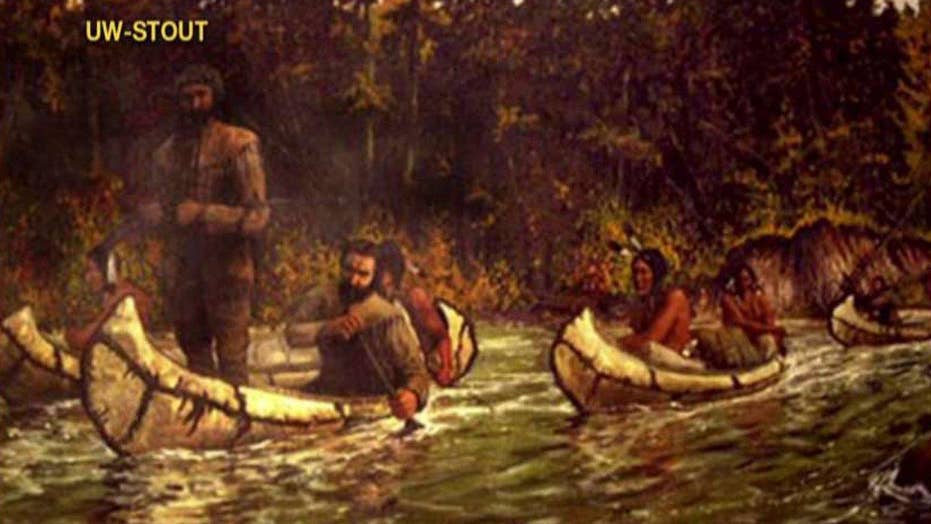 Historic paintings that adorned the halls of a Wisconsin university for decades -- until someone took offense at their depiction of Native Americans -- will be seen by appointment only.

The paintings, which critics say show the Native Americans in a subservient role to white settlers, were destined for storage until the latest compromise was reached. University of Wisconsin-Stout President Bob Meyer said the potentially "harmful" art will be kept locked in conference rooms.

"...Their current uncontrolled access pose a risk of having a harmful effect on our students and other viewers," Meyer said in  a statement last week on the paintings.

The 80-year-old paintings, which had hung in the hallways of Harvey Hall, depict French fur traders canoeing down the Red Cedar River with American Indians and a French fort. Both were produced by artist Cal Peters in 1936 and were recently restored with money from the Wisconsin Historical Society.

Avert your eyes: This painting of a fort was deemed offensive and must be kept in a locked room. (University of Wisconsin Stout)

The controversy over the artwork began when the school's Diversity Leadership Team complained the paintings were offensive to Native American students and promoted acts of "domination and oppression.”

In response, Meyer first ruled that the artwork be placed in storage but later changed his decision after criticism from First Amendment groups. He has since ordered “Perrault’s Trading Fort” taken to the university archives, while the “French Trappers on the Red Cedar” will be placed inside the dean's conference room in Harvey Hall, the largest academic building on campus.

"It was always my intention that, if at all possible, these paintings remain on campus because of their historical significance -- but under circumstances that provide for controlled access for viewing," Meyer said.

"The public will be able to view the painting in the Dean’s Conference Room in Harvey Hall by appointment. The University Archives location is open to the public but is overseen by the University Archivist, which also provides for controlled access," he said.

The paintings will be accessible only by appointment. (University of Wisconsin Stout)

The paintings also will be accompanied by documents that explain their historical significance as well as concerns Native Americans have expressed about them.

"After all, a university needs to encourage a free flow of ideas, even if those ideas make some people uncomfortable, as long as we don’t foist those ideas on unaware or unwilling recipients," Meyer said.

First Amendment-rights groups, however, are not pleased with Meyer's decision.

The Foundation for Individual Rights in Education (FIRE) and the National Coalition Against Censorship (NCAC) penned a joint letter to Meyer when he first said the artwork would be moved to storage. The groups also were not satisfied with Meyer's amended response.

"While Meyer’s solution avoids totally censoring the paintings, the decision to cloister them fails to capitalize on the educational value of the artwork — a request that was at the core of FIRE and NCAC’s letter to the university," FIRE said in a statement on its website.

In the letter, the groups suggested a "win-win option for UW-Stout, which would have furthered the institution’s interest in fostering inclusion while avoiding censorship."

"FIRE and NCAC suggested the school leave the paintings on display in their original location with additional signage providing historical context," the statement said. "They could then add various interpretations of the paintings and additional artwork that increases the diversity of voices included in the space."

"UW-Stout’s insistence on tightly controlling access to both the paintings and the narrative surrounding them means fewer people will see the works and, in turn, fewer discussions will be had," FIRE noted. "In short, UW-Stout is forgoing an opportunity to provide students the one and only product it should be pushing: a learning experience."