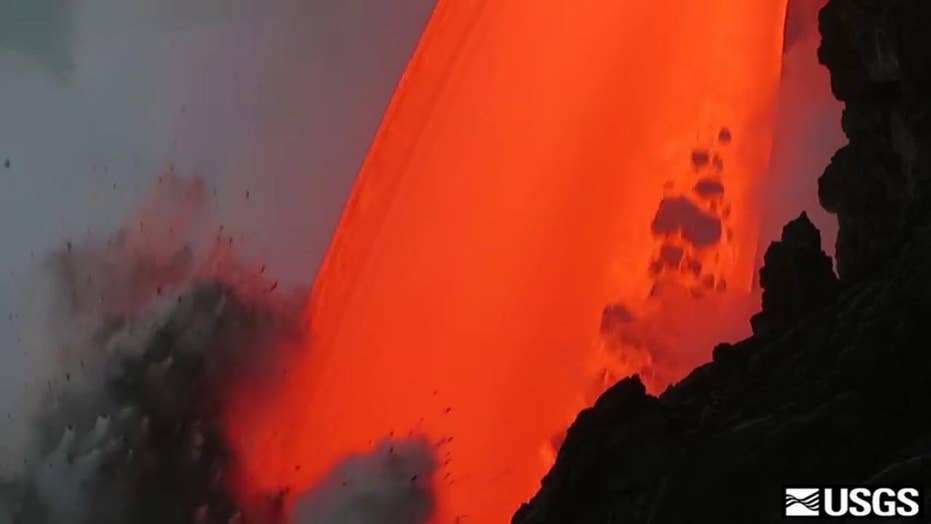 A Hawaiian native was captured on film swimming next to a lava zone on   Hawaii’s Big  Island, The San Francisco Chronicle  reported.

The swimmer, identified as  Kawika Singson, a Hawaiian native, was seen the  the footage being tossed around  by  waves like piece of drift wood.

“It’s super-heated steam laced with hydrochloric acid from the interaction with the seawater and  has shards of volcanic glass,” Janet Babb,  a  geologist, told the paper. “It’s something to be avoided.”

Thousands of visitors from around the world have swarmed Hawaii Volcanoes National Park by land, sea and air to take in the spectacle.

The billowy, bright-orange lava pops and sizzles, and reeks of sulfur and scorched earth, as it oozes across rugged terrain and eventually off a steep seaside cliff. When the hot rocks hit the water, they expel plumes of steam and gas — and sometimes explode, hurling chunks of searing debris.

The park has seen an increase of about 1,000 to 1,500 visitors per day since the current lava flow reached the sea in late July, boosting attendance to about 6,000 people daily, officials said.

Park spokeswoman Jessica Ferracane warns the area can be dangerous.

Hikers can get close enough that the soles of their shoes get hot. Also, the area is flanked by hardened lava rock as sharp as glass. Many people have suffered lacerations while trying to cross the jagged landscape, Ferracane said.

"Everybody wants to see the lava flow, but not everybody should be hiking out there," she said.

Additionally, when the lava touches the ocean, it reacts with the saltwater and produces harmful hydrochloric acid, which wafts into the air, Babb said.

The lava then quickly solidifies and creates a new landscape. According to the U.S. Geological Survey, the Puu Oo vent alone has created about 500 acres of new land since it began erupting a few decades ago. The latest flow, which began in May, has created about 8 new acres.

Most of Kilauea's activity has been nonexplosive, but a 1924 eruption spewed ash and 10-ton rocks into the sky and left a man dead.

Puu Oo's 1983 eruption resulted in lava fountains soaring over 1,500 feet high. In the decades since, the lava flow has buried 48 square miles of land and destroyed many homes.

In 2008, after a series of small earthquakes rattled the island, Kilauea's summit crater opened and gushed lava and rock over 75 acres of the mountain, damaging a nearby visitor overlook.

It's hard to predict when the volcano will inflate or when the current flow will stop, Babb said. It could slow down any day or keep cascading into the sea for months.