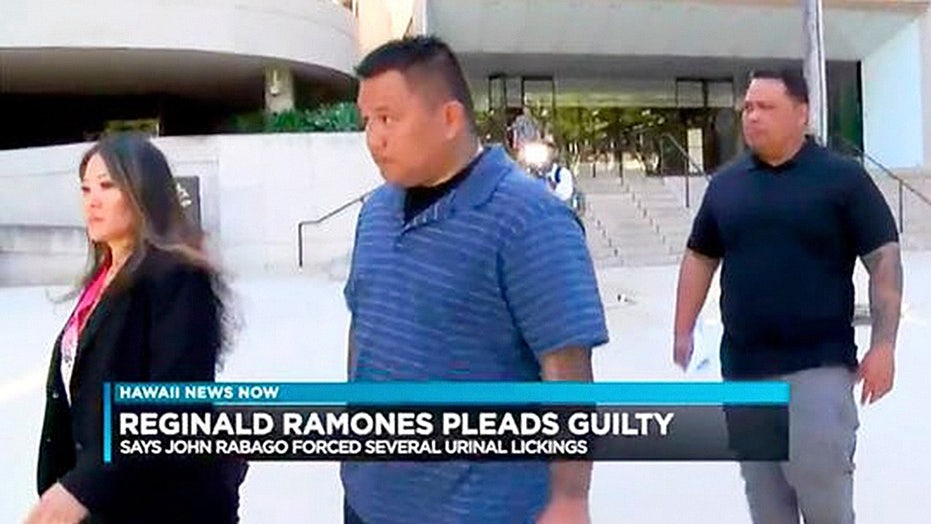 A Hawaii police officer who forced a homeless man to lick a public urinal to avoid being arrested pleaded guilty on Monday to depriving the man of his civil rights.

John Rabago, an officer with the Honolulu Police Department, admitted in federal court that he forced Samuel Ingall, 37, to put his mouth on a urinal in January 2018 after the man told him he'd do anything not to get arrested.

FLORIDA OFFICER INDICTED FOR ALLEGEDLY EXPOSING HIMSELF TO WOMAN, FORCING MINOR TO DISROBE

The incident unfolded after Rabago and another officer responded to a nuisance complaint about Ingall being in a bathroom in a Honolulu shopping area. Rabago claimed the man was uncooperative and initally gave a fake name. Rabago later threatened the man, saying in an aggressive tone: "If you lick the urinal, you won’t get arrested."

John Rabago, pictured here outside federal court in Honolulu, pleaded guilty on Monday to depriving a man of his civil rights after forcing him to lick a toilet to avoid arrest.  (Hawaii News Now/AP, File)

Ingall feared he would be arrested and reluctantly obeyed Rabago's orders, court documents state. Rabago allegedly threatened another man he was questioning previously by saying he wouldn't be arrested if he stuck his head in a toilet.

Rabago was "very remorseful" about what happened, his attorney, Megan Kau, said in court Monday, according to Hawaii News Now. She said that's "why he took responsibility."

Rabago and the other officer involved, Reginald Ramones — who left the police department in August — were both arrested and charged earlier this year with conspiring to deprive the man of his civil rights.

Ramones pleaded guilty in September to a lesser charge that he knew Rabago committed a civil rights violation but didn't inform authorities about it. He previously said in court that Rabago pushed him not to tell authorities what happened in the public bathroom and persuaded him to delete their text messages about it.

As of Monday, Rabago remained on restrictive duty with the department but, according to Hawaii New Now, he expects to be fired. Sentencing guidelines suggest Rabago could spend 30 months in prison.