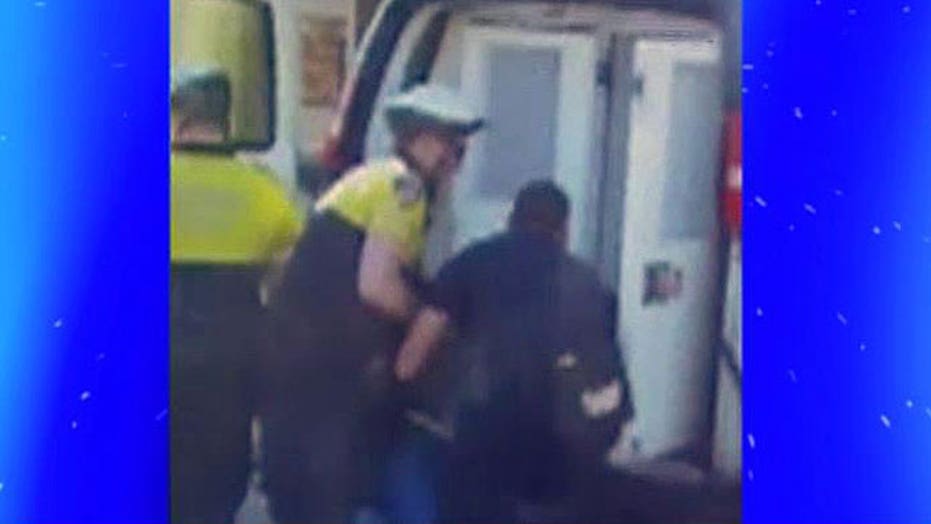 What happened to Freddie Gray inside the police van?

After arresting more than 200 people this week during the fierce riots in the city of Baltimore, police told Fox News Wednesday that they had to let half of them go.

Amid the bedlam of Monday’s unrest, it was difficult to document which officers had arrested which suspects and for precisely what reasons, a police spokesman said. Maryland Gov. Larry Hogan took steps to keep people jailed for two days without charges, but it still wasn’t long enough for officers to sort out what happened.

At least 20 officers were injured as a result of Monday’s riots, which were sparked by the death of Freddie Gray who died while in police custody.

Gov. Hogan said Monday that more than 200 people were arrested and suggested they could have to wait longer to have their day in court.

Normally, state law requires that people arrested without warrants appear before a court official within 24 hours of their arrests. But as part of the state of emergency, the governor extended the period to no later than 47 hours, according to a letter he sent Tuesday to Judge Barbara Baer Waxman, the administrative judge for the Baltimore District Court.

"This exercise of my authority is necessary to protect the public safety and to address the more than 200 arrests that were made by Baltimore Police Department and other law enforcement officials," Hogan wrote in the letter, a copy of which was obtained by The Associated Press.

Following a quiet night in Baltimore Tuesday, hundreds of people marched in solidarity throughout other cities across the nation Wednesday night.

At least 60 people were arrested in New York after police on a loudspeaker warned they would take action if the marched in the street. Protesters first rallied in Manhattan’s Union Square, where the chanted “no justice, no peace” and “hands up, don’t shoot,” a reference to the police killing of Michael Brown in Ferguson, Missouri last year.

In Boston, activists continued with a peaceful march from police headquarters in Roxbury to a pakr at Dudley Square.

Boston organizers said they want "amnesty" for the some 300 protesters and rioters who have been arrested in Baltimore, as well as a lifting of the city curfew and state of emergency declaration.

In Philadelphia, protesters plan to conduct the "Philly is Baltimore" demonstration Thursday afternoon at city hall. They've drawn parallels between the death of a local man shot during a traffic stop and the April 19 death of Freddie Gray in Baltimore.

Gray's arrest was recorded on cellphone videos by bystanders. His death has led to protests, rioting and looting in Baltimore.

Baltimore police say they chased Gray when he fled at the sight of an officer in a drug-infested neighborhood this month. Officers pinned him to the sidewalk and then lifted him and took him, his legs dragging on the ground, to a police van.

Gray, who asked repeatedly for medical help during the half-hour ride to a police station, died a week later.

Police say Gray died of a "significant spinal injury." An attorney for Gray's family says his spine was "80 percent severed in the neck area."