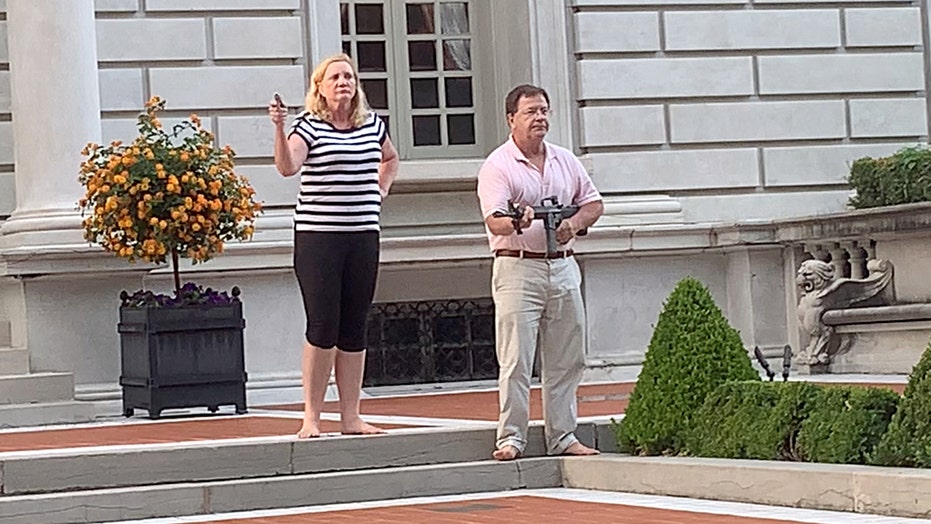 The St. Louis couple who shot to viral infamy when they pointed guns at Black Lives Matter protesters outside their mansion are accusing a news photographer of trespassing to capture a now-iconic image of the June confrontation.

The photo — which shows Mark wielding an AR-15 rifle in a pink polo shirt and khaki slacks, with Patricia by his side holding a semiautomatic handgun — contributed to the couple’s “significant national recognition and infamy,” the suit states.

The defendants, including Greenblatt and UPI, are profiting from “T-shirts, masks, and other items, and licensing use of photographs bearing Plaintiffs’ likenesses, without obtaining Plaintiffs’ consent,” the court documents claim.

“Defendants acted outrageously and beyond all reasonable bounds of decency, with their conduct regarded as atrocious and intolerable by any member of a civilized society,” the suit boldly charges.

Meanwhile, UPI recently said it was considering whether to send a “cease and desist” order to the couple — because they’ve been using the news service’s photo in a personal greeting card.

Newspaper photographers are allowed to capture images from public rights of way.

The McCloskeys, who live on a private street, have argued that protesters were also trespassing during the incident, which has since become a political lightning rod, earning the couple a spot at the Republican National Convention in August.

The couple have since been indicted on charges of unlawful use of a weapon and evidence tampering in the encounter and pleaded not guilty.

In addition to damages, the McCloskeys are asking for the court to ban the use of the photo and to transfer ownership of the image to them, along with any others captured from their property.