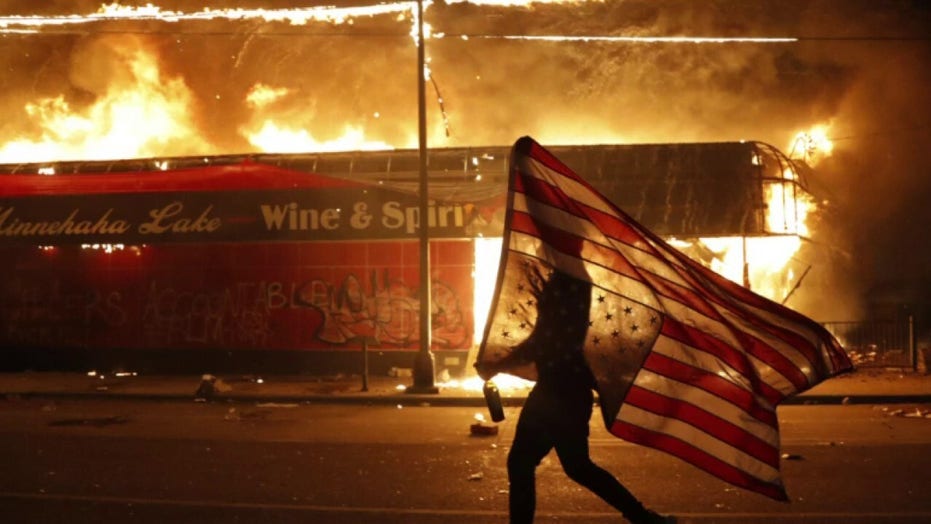 Since 1979, when crime was at its pinnacle across New York City, Curtis Sliwa, 66, has led a group of volunteers known as the "Guardian Angels" in signature red jackets who roam lawless pockets and aid those in need.

But Tuesday night, amid the ongoing unrest gripping much of the nation following the death of George Floyd in Minneapolis, was one of the most chaotic and confronting scenes he has ever encountered, he said.

"Throughout the coronavirus pandemic, we have mostly been in Chinatown to stop any hate crimes against Asians," Sliwa told Fox News. "But on Tuesday night, we were in SoHo working our way down Broadway when we heard about looters trying to get into a Footlocker, and we immediately ran to that location."

That was around 8 p.m., he continued, and his team of six managed to force the young men to drop their loot, although they vowed to return. Around two hours later, the cluster donning all black clothing and backpacks had gone from just a few to about 100.

"They tried to get in, but we weren't going to let them. I got hit," Sliwa recalled. "But we don't back down, and we don't surrender or retreat. We don't have guns or weapons, but we all have martial arts training, and we do get physical if we have too."

As the night progressed, the mayhem escalated. At about 10:45, the looters reappeared – and this time, they had tripled in size to some 300 – most of them armed with anything from hammers, lock cutters and claw hammers to baseball bats and machetes.

Police officers in riot gear stand by in Times Square during a protest in Manhattan in New York, Monday, June 1, 2020. New York City imposed an 11 p.m. curfew Monday as the nation's biggest city tried to head off another night of destruction erupting amid protests over George Floyd's death.  (AP)

"They started swinging at us," said Sliwa, who stood out front of the shoe store. "But we were not going to let them get inside; we were slamming and jamming quite a few of them. They were throwing glass bottles filled with liquids, as well as bricks and rocks. It was quite the battle."

Sliwa said they managed to hold out until the NYPD descended on the scene at around 11:45 p.m., prompting some to scurry to a nearby McDonald's to steal, while others got away and some were arrested.

However, the veteran volunteer "angel" underscored that the recently passed bail reform in New York – which came in play at the beginning of 2020 and essentially means that those apprehended don't need to post bail – is contributing to the ongoing turmoil that has clenched the city for multiple consecutive nights.

"It has almost become a badge of courage for (the looters)," Sliwa conjectured. "They get out in a few hours, and get to tell their friends they got written up. It's like earning their stripes."

In the early hours of Wednesday, Sliwa had to be treated for a linear fracture of the jaw at Bellevue Hospital, while fellow Guardian Angel Aram Sabet sustained a broken eye socket and broken nose and received 48 stitches.

Despite the wounds, Sliwa pledged to be right back into the thick of it Wednesday.

"We train for these kinds of things; we won't fold. We are defiant," he asserted. "We want to make a difference in these neighborhoods."

In the more than 40 years since the inception of the Guardian Angels, the outfit has spawned into more than 130 cities across the country and on an international scale.

In observing the many nights of rioting not only in New York but in the dozens of cities nationwide, Sliwa, who survived an attempted mob kidnapping in the 1990s as well as multiple other attacks, said there are hallmarks and common threads to how it unfolds night after night.

"The pattern is that looters come out and join any existing demonstration towards the end, then they splinter off into packs," he noted. "Some of them go off on scooters and scout the area; then they start flash-mobbing on their iPhones and quick messaging others and boom, they hit an area with as many people as possible and in full force."

From Sliwa's assessment, the organizers of the preceding peaceful protestors demanding justice for Floyd don't exert any control over what happens after curfew, and the intensity of the riots has spawned out of a "perfect storm" of conditions brought about by the extended coronavirus lockdown.

"You have a lot of young men who aren't going to school, who aren't working and have been sheltered at home for months. In places like Los Angeles, they have been told that things won't be properly open for months – until September," he added. "So, there is nothing immediate for them to do, and the looting has become an event."