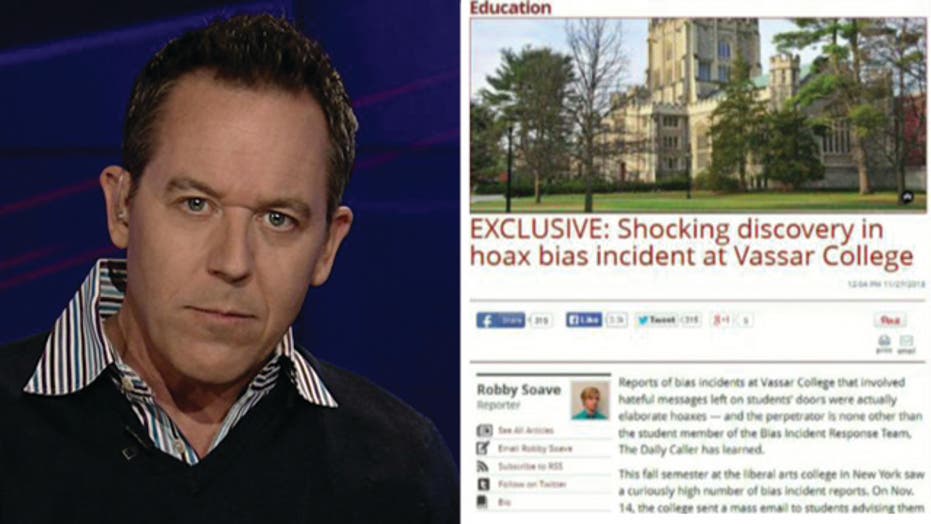 Gutfeld: Business is booming at the hate crime hoax factory

Since the election victory of Donald Trump, numerous stories have surfaced about hate crimes allegedly tied to supporters of the businessman or to his rhetoric, some true and many not.

Although the Southern Poverty Law Center reports that there have been hate crimes since the election, a number of the incidents have been disproven or shown to be hoaxes or ill-timed jokes. Here are some noteworthy ones.

A Muslim teenager from Long Island by the name of Yasmin Seweid told authorities that she was harassed on the subway by men who yelled "Donald Trump!" while trying to remove her hijab. The police said within two weeks that she admitted she was lying because she broke her curfew; she now faces charges of filing and false report.

A Muslim woman in Louisiana claimied that she was attacked and had her hijab ripped off. The Lafayette Police Departmenet said that she "admitted that she fabricated the story about her physical attack as well as the removal of her hijab and wallet by two white males."

Trump supporters and protesters face off in Maine on Dec. 19. (AP)

A hateful note on a white board at Elon Univeristy in North Carolina that read "Bye Bye Latinos Hasta La Vista" was actually satire written by a Latino student at the school, according to the Elon News Network.

Hateful notes allegedly sent to a North Park University student in Chicago were "fabricated" according to David Parkyn, the university's president. The student said on Nov. 14 she had received messages taped to her door containing harassing language and mentions of Trump.

University of Minnesota student Kathy Mirah Tu alleged that she was accosted by white men and told to "go back to Asia." The University's police department and the Minneapolis Police Department said they had no record of the incident and Tu's Facebook post later disappeared.

A Mississippi man arrested and charged with first degree arson in the burning of an African-American church that was spray-painted with the words "Vote Trump" is a member of the congregation, the church's bishop said.

The Mississippi church and the man who was arrested for setting the fire, Andrew McClinton. (FoxNews)

A Muslim University of Michigan student who said that a man threatened to light her on fire if she didn't remove her hijab was lying about the incident, police officials said. After reviewing hours of footage and speaking the businesses in the area, they could not corroborate her claims.