"Grocery, totally ridiculous," one Costco customer told Fox News. "It's no help out here for us … You're dealing with enough things stressing us out, then you have to come to the grocery store and spend a lot more than what we're used to spending."

US INFLATION SURGES TO 39-YEAR HIGH AS CONSUMER PRICES SOAR 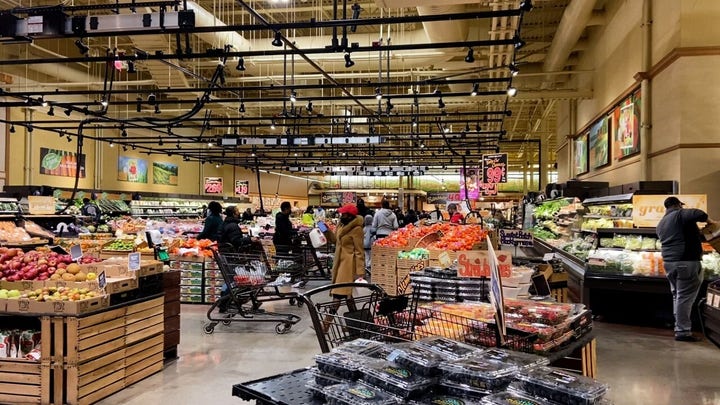 Food prices rose 6.4% over the last year, the largest 12-month increase since the period ending in December 2008, the November Consumer Price Index showed. Prices for all six major food groups rose by nearly 1% in November, the third consecutive monthly increase.

"There have been an increase in the price of food," as well as "clothings, everything," one woman shopping for her family told Fox News. "It's been challenging … even though as parents, we have to do everything to satisfy the kids … it's not easy."

"By this time, usually my kids will have everything under the tree," the woman added.

"There's a sense that everything going to hell in a handbasket, when it really isn't" she told Fox News.

Customers largely blamed the increases on supply chain issues, labor shortages, and COVID-19. They also felt they were being taken advantage of.

"I think they're taking advantage of us because of COVID and all the people not working," the Costco customer told Fox News.

The woman shopping for her family similarly said: "It's difficult to have workers."

"It's a combination of a lot of things, but it's mostly COVID and the supply chains," another man told Fox News.

The Biden administration released a fact sheet Wednesday that said the president’s Supply Chain Disruptions Task Force made "significant progress to alleviate bottlenecks that are rooted in the global pandemic" by "moving record amounts of goods to keep shelves stocked" in an attempt to meet "record demand."