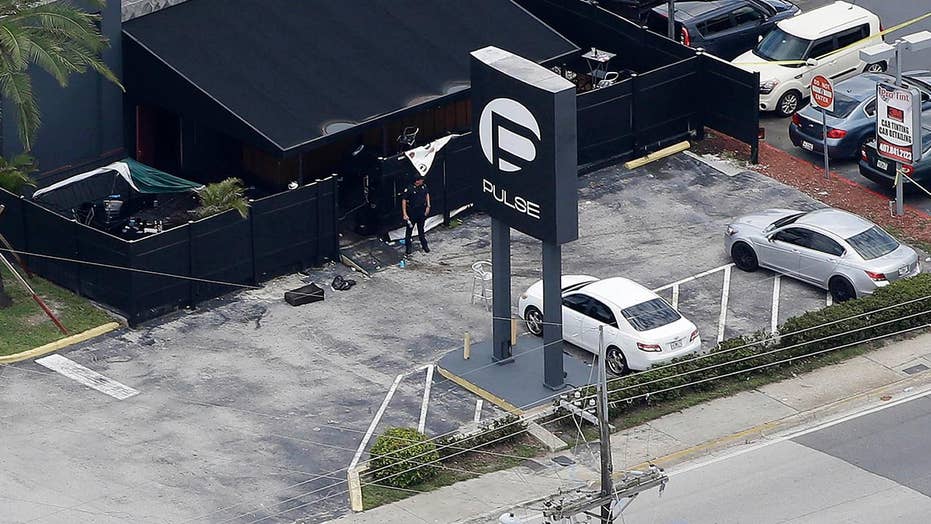 ORLANDO, Fla. – Jurors in the trial of the wife of the man who shot and killed 49 people inside a Florida nightclub watched graphic videos of the massacre Thursday.

The Orlando Sentinel reports that Salman shielded her face from the graphic content when prosecutors showed it to the jury.

The disturbing video showed club-goers dancing and mingling prior to the attack, as Mateen's vehicle pulled up outside the club. Minutes later, Mateen was shown entering the club through the front doors. As the gunfire began, victims began collapsing over one another, falling like dominoes atop each other.

Mateen moved toward a bar in the back of the club, before shooting again. The video showed him reloading as people near him tried to crawl to safety. Mateen was the only person standing.

The video showed him opening fire again — shooting people already lying on the dance floor. Jurors watched as Mateen walked toward the restroom where — as the jury knows from other video shown yesterday — he began firing shots into the bathroom stalls, where some had taken refuge.

As photos from inside the club of bodies were shown, one juror in the front row held her arms, sitting on the edge of her seat. Afterward, she slouched back, removing her glasses and blinking several times.

Prosecutors are trying to link the 31-year-old Salman to the actions of her husband. First, they must establish that a terrorist act was committed when he killed 49 people in June 2016 at Pulse, a gay nightclub in Orlando; prosecutors said he was motivated by Islamic terrorism.

"This trial is about what the defendant knew," Assistant U.S. Attorney James Mandolfo said in opening statements Wednesday. "The defendant's cold actions gave Omar Mateen a green light to commit these crimes on behalf of ISIS."

Mateen, who had pledged allegiance to the Islamic State group, was killed by police in the hours after the shooting. At the time of the attack, it was the worst mass shooting in modern U.S. history. The fatal shooting of 58 people in Las Vegas surpassed it last October.

Prosecutors said Salman knew Mateen was buying ammunition for his AR-15, helped him spend thousands of dollars before the attack and knew about his plan when he left the house in the hours before the shooting. They also say she lied, tried to mislead FBI agents and had knowledge of her husband's sick fascination with violent jihadist videos and terrorism.

He described a wife who knowingly went to at least two locations with Mateen to "scout" sites of potential terrorist attacks. One was City Place, an open-air shopping center in West Palm Beach. The other was Disney Springs, a crowded dining and shopping area near the famed theme parks, Mandolfo said.

Salman's attorney, Linda Moreno, argued in opening statements that some of the claims are contradicted by cellphone records and other evidence. She said Mateen decided to go to Pulse at the last minute.

"Omar Mateen didn't know where he was going that night," she said. "And if he didn't know, how would his wife know?"

When Salman was questioned by federal agents, she cooperated, said Moreno, adding that her client never asked for a lawyer and consented to a home search. The FBI in their hours-long questioning manipulated and coerced her, Moreno asserts.

Salman was arrested in 2017 in California, where she was staying with family, and has been jailed since then.