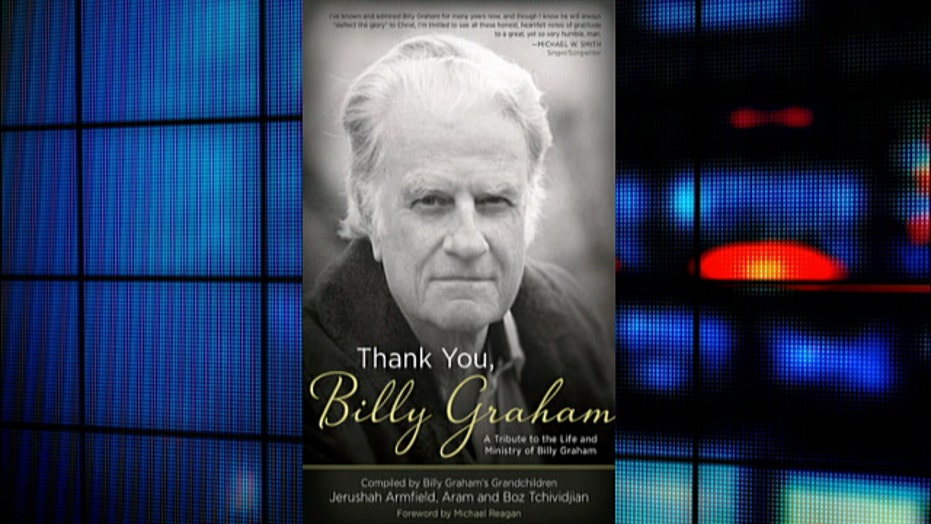 Grandchildren of Billy Graham: 'Daddy Bill' is the real deal

'Thank You, Billy Graham' is a tribute to the famous reverend put together by his grandkids

Three of the Rev. Billy Graham's grandchildren are paying tribute to their grandfather in a new book called, "Thank You, Billy Graham." The book consists of stories compiled from ThankYouBilly.com, where people across five continents sent in letters of thanks to the famous pastor.

Jerushah Armfield, Aram Tchividjian and Boz Tchvidijian spoke to Fox News' Lauren Green about the book and Billy Graham's impact on their lives.

"I think there's always a time where you realize your grandfather is not the typical grandfather," Boz said. "Walking into the Crusade and realizing like there's 50,000 people here to hear Daddy Bill, that's when you begin to realize, OK, there are some differences here."

Graham was a very hands on grandfather, often attending school events and attempting to divert attention away from himself when the family was out in public.

"I remember one time we were all out as a family having dinner and these two elderly women approached him," Aram recalled. "They just came up to him and they said, 'Has anybody ever told you you look remarkably similar to Billy Graham? And he just looked at them and he goes, 'I get that all the time.' ... I don't think they ever knew that they were actually talking to Billy Graham, but it was really funny."

The three siblings said they were inspired to put together "Thank You, Billy Graham" after hearing so many stories of how their grandfather and his ministry changed lives.

One story in particular stood out to Jerushah:

"It was my job to edit all of these stories and choose which ones we were going to use and as I was reading through them, one of them caught my eye because the individual was saying he had been raised in Switzerland and our father, who passed away, had been raised in Switzerland," Jerushah said. "This individual said that they came to Christ through reading our grandfather's book "Peace With God." When he mentioned at the end of the story that he had the opportunity then to marry Billy's oldest daughter did I realize that it was the story our father had submitted prior to his passing away."

ThankYouBilly.com is still accepting thank-you notes and stories of how Billy Graham influenced the lives of people all over the world.