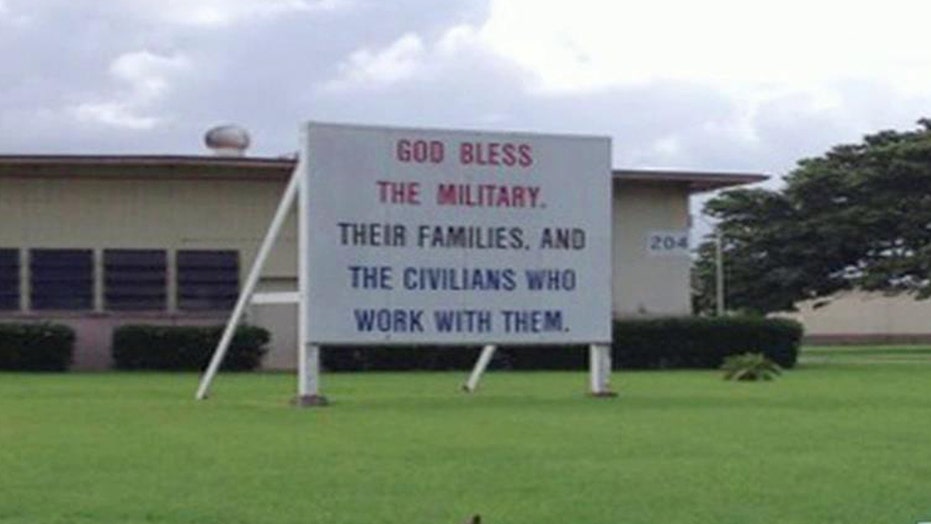 A 14-year-old "God bless the military" sign honoring service members and their families on a Hawaii base came under fire last week when a religious watchdog group asked that it be removed.

The sign posted at Marine Corps Base Hawaii in Kaneohe reads, “God Bless The Military, Their Families, And The Civilians Who Work With Them,” in red, blue and black lettering on a white background. But the Military Religious Freedom Foundation is asking that the billboard be moved to chapel grounds or taken down altogether, according to the Marine Corps Times.

“This sign is a brazen violation of the No Establishment clause of the Constitution, as it sends the clear message that your installation gives preference to those who hold religious beliefs over those who do not, and those who prefer a monotheistic intervening god over deities or theologies,” MRFF’s Blake Page wrote in an email to Col. Sean C. Killeen, the commanding officer at the base.

The sign stands out “like a tarantula on a wedding cake,” MRFF founder Mikey Weinstein told the Honolulu Star Advertiser.

Weinstein said he’s received complaints from 23 Marines – 21 of whom are Protestant – of differing ranks. He said they haven’t expressed their concerns to base superiors due to fear of reprisal.

The base is looking into the issue, a spokesman said.

“MCBH will exercise due diligence to ensure compliance with existing regulations and law, including the Establishment Clause of the U.S. Constitution,” Capt. Timothy Irish.

Weinstein told the Marine Corps Times that if the sign stays in its current location the base would have to permit a sign stating, “There is no God to bless our military, their families, and the civilians who work with them” or giving credence to “Allah, Satan or the flying spaghetti monster.”