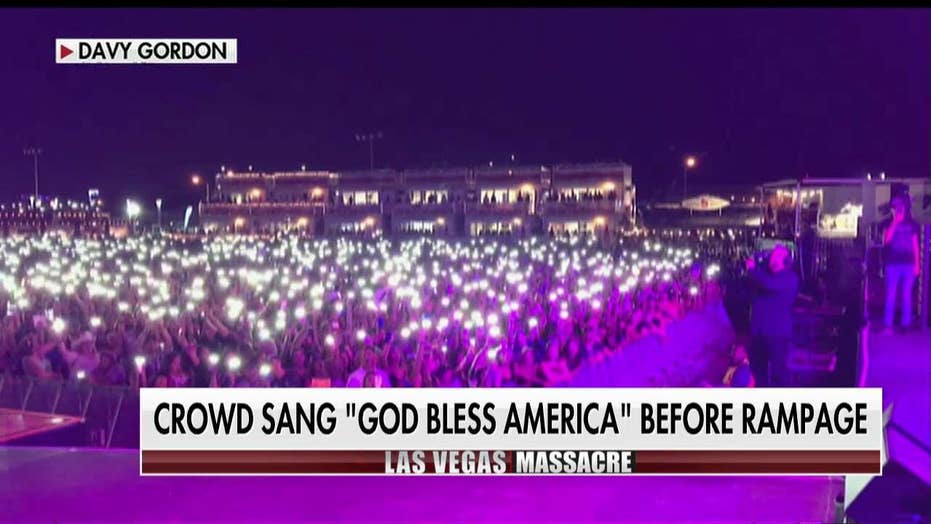 “God Bless America” is a “warmongering song” that should not be played at sporting events, according to an Ithaca College professor.

“In the aftermath of Sept. 11, 2001, the expressions of hyper-patriotism took hold,” Professor Stephen Mosher wrote in an op-ed for The Ithacan, “Irving Berlin’s warmongering song ‘God Bless America’ became our second, unofficial national anthem at the ballpark.”

That song, “God Bless America,” was sung by concertgoers in Las Vegas on Sunday night, led by country duo Big & Rich, just an hour before a shooter opened fire on them.

“The ‘God Bless America’ sung at the concert in Las Vegas was not the song Irving Berlin wrote (in 1918 for a never produced Broadway show),” Mosher wrote in an email to Fox News. “It was also not the song Kate Smith sang on her radio show that inspired Woody Guthrie (who was often associated with the Communist party) to write ‘This Land is Your Land.’  It wasn't even the ‘God Bless America’ that appeared in American popular culture after September 11, 2001.”

He added: “What was warmongering in 1940 was healing in 2001, and now is so much a part of the cultural landscape, its meaning has been ‘lost.’”

According to the library of Congress, Berlin wrote “God Bless America” as a “peace song” in response to the “fascism and war threaten[ing] Europe” in 1938.

“God Bless America” debuted on Nov. 10, 1938 to commemorate Armistice Day, and the revenues for the song went to the Boy Scouts and the Girl Scouts of America.

Mosher, a former Boy Scout, as he points out in his op-ed, doesn’t seem to attribute the original meaning of Berlin’s song to its modern-day expression.

“Regardless of Berlin’s intentions, “God Bless America,” was used to motivate the U.S. population to enter WWII,” Mosher said.

In his op-ed, Mosher’s main point is “why do we play the national anthem before sporting events and not most other cultural gatherings?” He criticized President Trump for putting the American flag on MAGA hats, which is “disrespectful” according to the U.S. flag code -- despite the version normally worn by Trump not having a flag on it -- and called NFL owners “oligarchs,” many of whom are Trump contributors who are just protecting their investments by playing the national anthem.

“No one can argue that the national anthem is NOT political, and, if those who criticize athletes kneeling should NOT use sports for political statements, then why have the anthem at all?” Mosher wrote. “The national anthem can also be considered warmongering by some.”

He added: “Maybe ‘America the Beautiful’ would be better (although it has problems for 21st century citizens)."