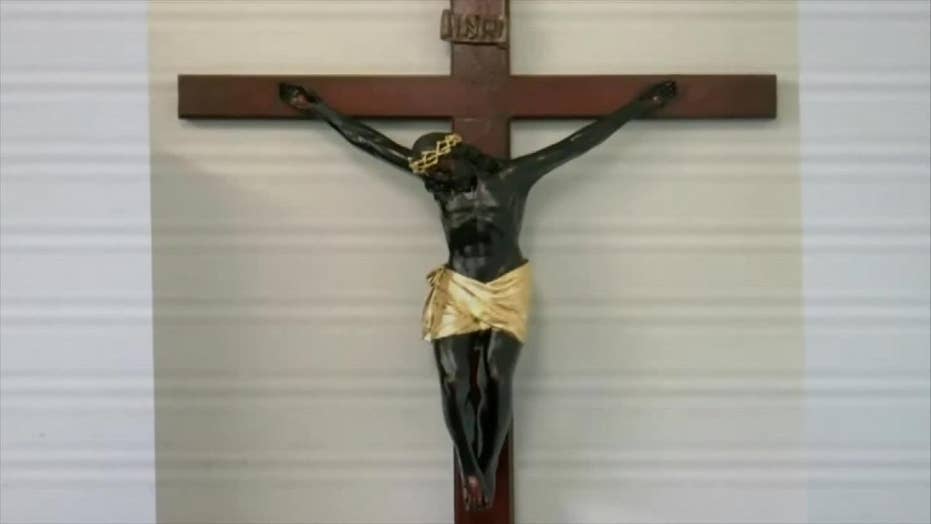 Police investigating the theft of a crucifix stolen from a Catholic church in Cathedral City, California

California police were on the hunt for a man accused of burglarizing a Catholic Church near Palm Springs on Monday, taking with him a $1,600 wooden cross.

The unidentified man was captured on video the approaching the St. Louis Catholic Church early Monday morning and then leaving with a wooden cross of Jesus Christ under his arm, the Cathedral City Police Department told KESQ.

Reverend Luis A. Guido told the station that the Cristo Negro, a replica of the "Black Christ of Esquipulas" made in Guatemala, was never secured properly because he never imagined that someone would take it.

"We never expected someone would want to steal Christ so we just had a small lock, a baby lock. Probably just needed pliers or a screwdriver and we found the lock on the floor, the door open and this empty," he said.

Guido said he hoped that whoever took the $1,600 crucifix would return it since it's a special symbol for the church's Central American parishioners.

"It's sad that it happened and we understand that things happen unfortunately and we pray for the man who did it and hopefully he has a conscious conversion."

Police said the church was vandalized as well. The investigation was ongoing.