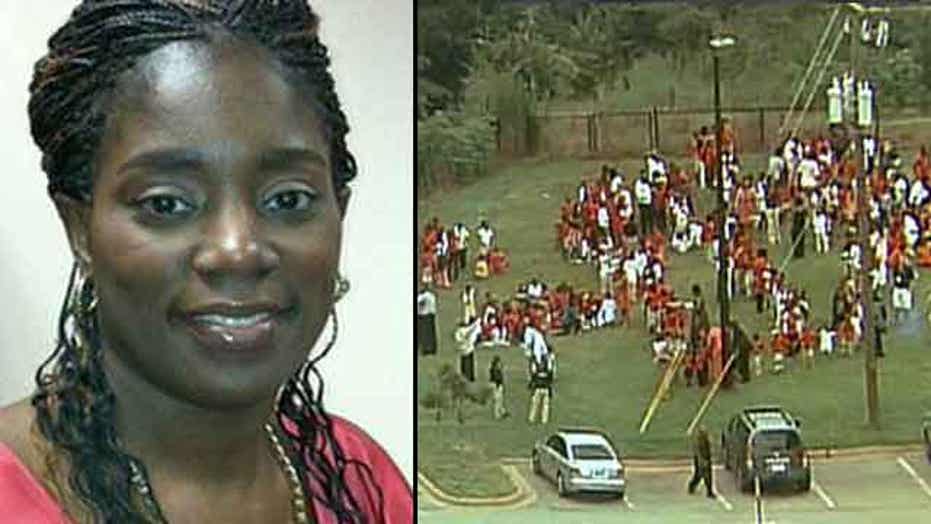 School bookkeeper gets gunman to stand down during 911 call

Woman relays messages from suspect to emergency dispatchers in Georgia

A Georgia elementary school bookkeeper is being praised for her calm under pressure when a man police say was armed with an AK 47-style rifle and nearly 500 rounds walked into her school Wednesday and fired off shots at police officers surrounding the building.

On a recording of a 911 call released Wednesday, Tuff can be heard relaying messages from Hill to DeKalb County emergency dispatchers before convincing him to surrender. She tells the dispatcher that Hill said he wasn't there to hurt the children but wanted to talk to an unarmed officer.

"We're not gonna hate you, baby. It's a good thing that you're giving up," Tuff says after having Hill put his weapons and ammunition on the counter. Tuff tells Hill she loves him and will pray for him.

"He said to tell them to back off. He doesn’t want the kids, he wants the police. He said he don’t care if he die. He don’t have nothing to live for," Tuff said on the 911 recording obtained by WABE.org.

"He said he should have just went to the mental hospital instead of doing this, because he's not on his medication,"  Tuff is heard telling the dispatcher.

No one was injured, but police said the suspect shot into the floor and exchanged gunfire with officers who had surrounded Ronald E. McNair Discovery Learning Academy in Decatur, a suburb east of Atlanta. The school has 870 students in pre-kindergarten through fifth grade.

Dramatic television footage showed lines of young students racing out of the building with police and teachers escorting them to safety. They sat outside in a field for a time until school buses came to take them to their parents at a nearby Wal-Mart.

The exchange between Tuff and the suspect was captured on a recording of a 911 call made by school officials to dispatchers.

Tuff begins by telling Hill of her own struggles, including raising a disabled child and losing her husband. The bookkeeper reassures him by saying he didn't hurt anyone, hadn't harmed her and could still surrender peacefully.

Before he surrendered, Tuff took to the school's public address system to say Hill was sorry for what he'd done and didn't want to hurt anyone -- although the lockdown remained in effect.

Hill is charged with aggravated assault on a police officer, terroristic threats and possession of a firearm by a convicted felon. Police declined to discuss what he told them when questioned.

"We have to make a reasonable assumption he was there to do harm to someone," DeKalb County Police Chief Cedric L. Alexander said.

The DeKalb County Public Defender's office said in a statement that it was representing Hill, calling him "a young man with a long history of mental health issues."

"Mr. Hill is being represented by members of our Mental Health Division and he has decided to waive his first appearance today," the statement said. "We are all very thankful that no one was hurt in this incident and that all of the children are safe."

One of the office's attorneys, Claudia Saari, wrote in an email that a preliminary hearing is scheduled for Sept. 5.

Police said Hill got the gun from an acquaintance, but it's not clear if he stole it or had permission to take it. His motive is still unclear.

Tuff told WSB-TV in Atlanta that she tried to keep Hill talking to prevent him from walking into the hallway or through the school building.

"He had a look on him that he was willing to kill -- matter of fact he said it. He said that he didn't have any reason to live and that he knew he was going to die today," Tuff said.

Hill was arrested in mid-March for making terroristic threats in Henry County, DeKalb and Henry County sheriff's officials have said. He was sentenced to probation. A woman who said she served as a mother-like figure to him said he didn't seem to have any friends and rarely talked about his family or past during the months he lived with her and her husband several years ago.

He was quiet and didn't display anger or violent tendencies, said Natasha Knotts, the woman who took him in after he started coming to the small church where her husband is pastor and she is an assistant pastor.

Knotts told The Associated Press on Wednesday that Hill lived with them for about six months in his late teens.

"He was part of our family," Knotts said, though they were not related. She said her family was aware that "he had a mental disorder" before he moved in.

Hill told her that his birth mother was dead and that he didn't know his father. He also has brothers.

Knotts was shocked when she realized Hill had been taken into custody.

"This is something that's totally out of his character. This is not him. This is not the Mike that I know. For anyone that knew Mike, this was a total devastation," she said in an interview at her home in Lithonia, Ga.

She kept in touch after he moved out and said he'd recently been living with another couple who belonged to the church. Knotts last saw Hill about a month ago and he seemed fine.

Knotts said Hill called her sister Tuesday afternoon before the shooting to thank the family for all they had done for him and said he had a rifle. He did not say what he was planning to do.

Police released an undated photo of Hill posing with an assault rifle they believe is the one used Tuesday.

Knotts said she thinks Hill's actions were a plea for help.

"Unfortunately," she said, "he didn't know a better way to get it."