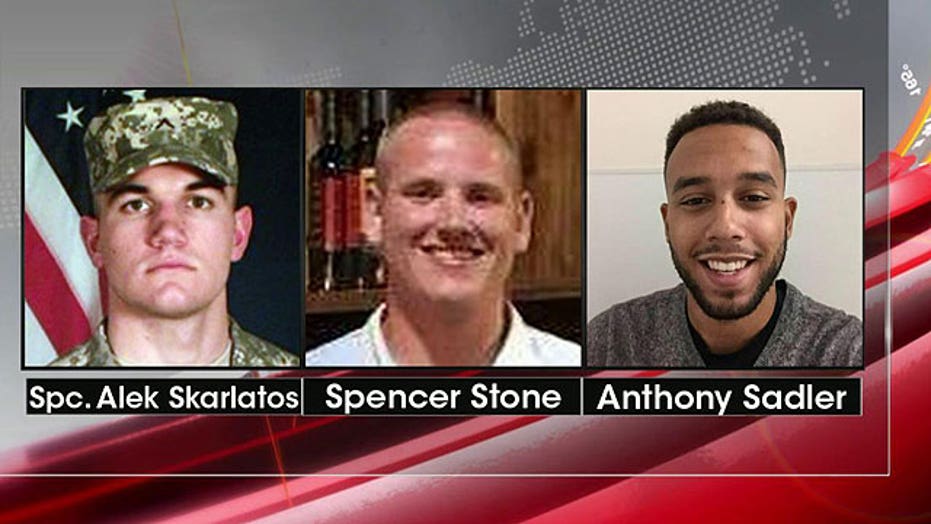 Parents of hero proud of son

Three Americans are being hailed as heroes Saturday for tackling and disarming a gunman on a high-speed train travelling between Amsterdam and Paris Friday.

Anthony Sadler, a senior at Sacramento State University, was traveling with childhood friends Spencer Stone, an Air Force serviceman from Carmichael, California, and Alek Skarlatos, a National Guardsmen from Roseburg, Oregon, when they heard a gunshot and breaking glass.

Sadler told The Associated Press that they saw a train employee sprint down the aisle followed by a gunman with an automatic rifle.

"As he was cocking it to shoot it, Alek just yells, 'Spencer, go!' And Spencer runs down the aisle," Sadler said. "Spencer makes first contact, he tackles the guy, Alek wrestles the gun away from him, and the gunman pulls out a boxcutter and slices Spencer a few times. And the three of us beat him until he was unconscious."

Three men who helped to disarm an attacker on a train from Amsterdam to France, Anthony Sadler, from Pittsburg, California, Aleck Sharlatos from Roseburg, Oregon, and Chris Norman, a British man living in France, pose with medals they received for their bravery at a restaurant in Arras. (Reuters)

Another passenger helped the servicemen tie the gunman up, and Stone then quickly turned to help another passenger who had been wounded in the throat, stopping his bleeding until paramedics came, Sadler said.

French actor Jean-Hugues Anglade, whose finger was injured "to the bone" as he broke the emergency alarm glass, told the magazine Paris-Match that passengers thought they were going to die "because we were prisoners of this train." Anglade said he, his two children and companion were in the last car, No. 11, one car away from No. 12 where the gunman was tackled and subdued.

He said, "We heard passengers shouting in English, `He's firing, he's firing. He has a Kalashnikov."' He said he saw train personnel running down the corridor to take refuge in their work car, and claimed they locked the door and refused to answer desperate knocks.

Throughout the terrifying ordeal, Sadler said, “The gunman never said a word.” Sadler said French authorities were to speak with him Saturday in Arras, where scientific police circulated around the cordoned-off train station.

A White House official told Fox News on Friday that President Obama was briefed on the incident Friday evening.

Stone remained hospitalized Saturday after being stabled, though the Pentagon said the injury was not-life threatening. Another passenger was wounded by a handgun in the attack, according to a police union official.

"Alek wrestles the gun away from him, and the gunman pulls out a boxcutter and slices Spencer a few times. And the three of us beat him until he was unconscious."

It remains unclear whether there was a political motive to the gunman’s actions. French authorities are questioning the 26-year-old Moroccan attacker and are expected to speak to at least one of the Americans who subdued the man. Counterterrorism police are leading the investigation, according to the Paris prosecutor’s office.

French Interior Minister Bernad Cazenueve, speaking in Arras where the train was diverted, said the Americans “were particularly courageous and showed great bravery in very difficult circumstances,” and that “without their sangfroid we could have been confronted with a terrible drama.” He also called for caution before jumping to conclusions.

French authorities are on heightened alert after Islamic extremist attacks in January left 20 dead, including three gunmen. In June, a lone attacker claiming allegiance to ISIS beheaded his employer and set off an explosion at an American-owned factory in France, raising concerns about other attacks throughout the country.

"The President's thoughts and prayers are with all of the victims of this attack, and he wishes them speedy and full recoveries," the White House official said.

"Echoing the statements of French authorities, the President expressed his profound gratitude for the courage and quick thinking of several passengers, including U.S. service members, who selflessly subdued the attacker. While the investigation into the attack is in its early stages, it is clear that their heroic actions may have prevented a far worse tragedy. We will remain in close contact with French authorities as the investigation proceeds."

Skarlatos, 22, had returned from deployment in Afghanistan in July, and Stone is stationed in the Azores, according to Skarlatos’ step-mother Karen Skarlatos.

She spoke with her step-son immediately after the incident. "He sounded fine, but he was intense — he sounded like he had just thwarted a terrorist attack."

"Alek and Spencer, they're big, brave, strong guys and they decided they were going to tackle him. And they did," she told the AP from Oregon. "Spencer got a couple good slices on him. But they were able to subdue him while the train was still moving."

The gunman didn’t fire his weapon but wounded one man with a handgun and the other with a blade, said Philippe Lorthiois, an official with the Alliance police union.

The suspect is a 26-year-old Moroccan, according to Sliman Hamzi, an official with the Alliance police union who spoke on French television i-Tele.

Europe's major rail stations, such as Paris' Gare du Nord and Brussels' Gare du Midi, are patrolled by soldiers armed with rifles, but passengers can board most high-speed trains without passing through metal detectors or having their bags searched or showing their passports.

Shaken passengers from the train that was attacked arrived early Saturday at Paris' Gare du Nord train station, several hours later than schedule. They were greeted by a large group of SNCF staff with water and meals and help finding hotels and taxis.