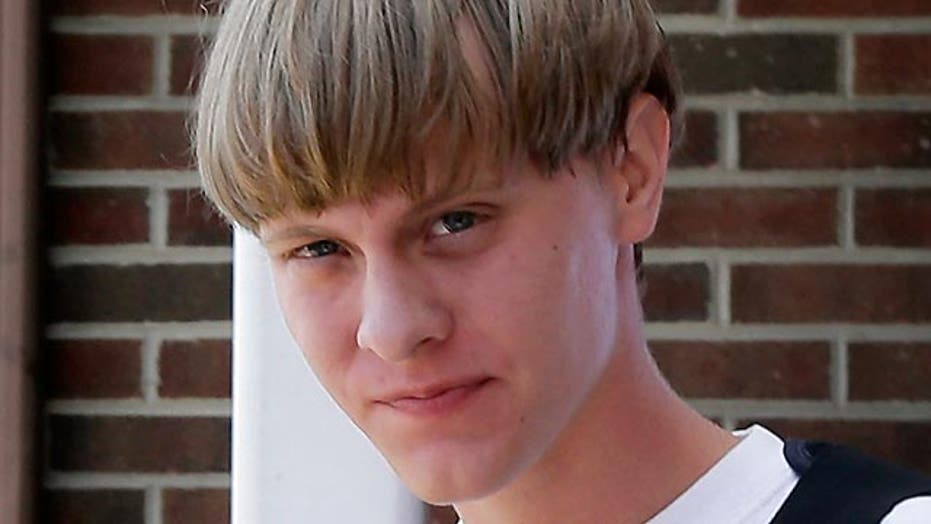 What was going on in the head of Dylann Roof?

A black friend of the white man accused of murdering nine people at a Charleston church says the suspect told him a week prior to the killings that he planned to shoot up a local college campus.

Christon Scriven, a drinking buddy of Dylann Roof, told The Associated Press Friday that he thought Roof’s statements were just drunken bluster. However, Scriven said that he was concerned enough that he and another friend, Joey Meek, went out to take his .45-caliber gun, hiding it in an air-conditioning vent of a mobile home until they all sobered up.

"He just said he was going to hurt a bunch of people" at the College of Charleston," said Scriven, 22.

"I said, 'What did you say? Why do you want to hurt those people in Charleston?'"

Just a week later, Roof, 21, is believed to have gone into Charleston’s historic Emanuel African Methodist Episcopal Church, sat in for a Bible study class for at least an hour and then fired upon participants.

Other friends have described Roof as a troubled and confused young man who alternated between partying with black friends and ranting against blacks to his white friends.

Four months before the deadly rampage, court records show Roof was arrested at a Columbia shopping mall on a misdemeanor drug charge after going around dressed in all black, asking suspicious questions about when stores closed and employees left for the night. He was then arrested again, for trespassing at the mall despite being banned from the premises.

Before it was deleted, Roof’s Facebook profile showed a picture of himself wearing a jacked adorned with white-supremacist flags of troubled South Africa and the former country of white-ruled Rhodesia. Roof also had several black people among his social connections.

Scriven and Meek are neighbors in a Lexington, South Carolina mobile home where residents say Roof was a frequent visitor in recent months. Meek and his family were close to Roof until Roof dropped out of his high school. Meek said they had lost touch for several years before recently reconnecting.

Meek told The Associated Press Thursday that while Roof was drunk he complained “blacks were taking over the world" and that "someone needed to do something about it for the white race.” Meek also said Roof told him he used birthday money from his parents to buy a .45-caliber Glock semi-automatic handgun.

Scriven said he first met Roof through Meek. They would drink on occasion and talk about fishing and NASCAR, but never race, he said.

"One night we all got drunk together and since then, me and Dylann were just homeboys," Scriven said. "We would just chill every day."

Scriven said over time Roof began to confide his personal issues with him. Roof was upset about bouncing between homes of his divorced parents. He would stay for days at the mobile home park, smoking American Spirit cigarettes and drinking hard, Scriven said. Then he would go home for a day or two to get clothes and money.

Scriven said he could tell Roof was depressed, and that he complained that he wasn't getting the love and emotional support he needed from his parents. When he got upset, Roof would retreat to his car, blasting a cassette tape of opera.

"I don't think his parents liked his decisions, the choices that he made to have black friends," Scriven recounted. "His mom had taken the gun from him and somehow he went back and took it from her. ... That's when we saw the gun for the first time: .45 with a high-point laser beam."

Last week, while drinking in the back of Scriven’s house, Roof blurted out his plans to carry out a mass shooting at the College of Charleston.

"I don't think the church was his primary target because he told us he was going for the school," Scriven said Friday. "But I think he couldn't get into the school because of the security ... so I think he just settled for the church."

Scriven said he told Meek about what Roof had said, and the two of them decided to take Roof's gun. They hid the gun in Meek's trailer. But Meek's girlfriend later told them they needed to get the gun out of the house. So they gave it back to Roof.

When Scriven saw this week that Roof was arrested, he said it hit him "that he actually did all the stuff he said he was going to do, like he actually killed these people."

Though none of them took the statements seriously, Scriven said he and Roof's other friends are now struggling with the knowledge that they might have been able to prevent the killings.

"I think everyone feels guilt," Scriven said. "There are a lot of things that happen in life that we just don't understand and we'll never understand. And this situation is something that you're not going to find the answers to from ordinary people. ... The only person that can tell you is Dylann."