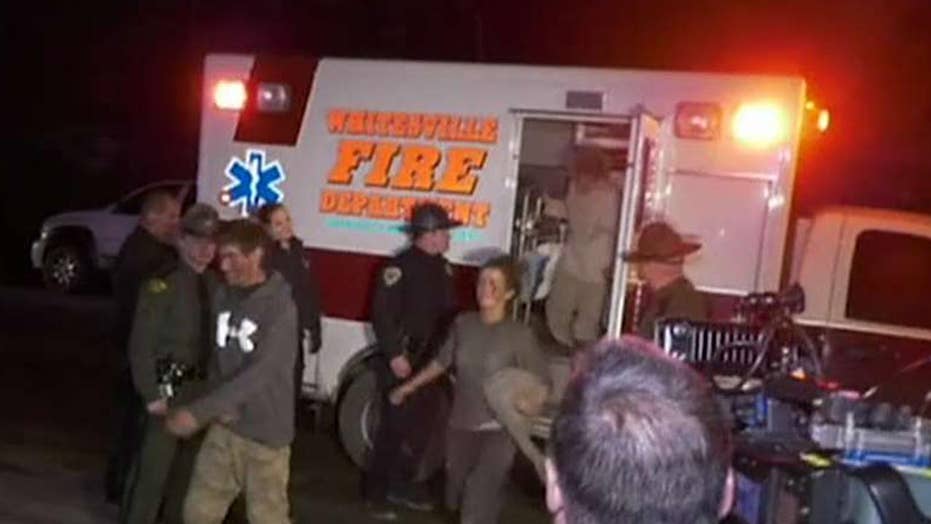 Four people who touched off a frantic search after becoming trapped in an abandoned West Virginia coal mine earlier this month now face charges, authorities said.

Two men, Eddie Williams, 43, and Cody Beverly, 21, were arrested Friday and charged with breaking and entering for their misadventure deep into the Rock House Powellton mine in Clear Creek, about 30 miles southeast of Charleston. Williams was also charged with felony conspiracy and giving false information to law enforcement officers, according to a criminal complaint.

“Each of the four are being dealt with, in turn."

Raleigh County authorities said the foursome went into the mine on Dec. 8 to steal copper wire, but three – Beverly, Kayla Williams and Erica Treadway -- became  lost for nearly a week before they were rescued. Williams made his way out after two days and went to authorities.

According to a criminal complaint, Eddie Williams implicated the three others during an interview with a sheriff’s detective.

“Each of the four are being dealt with, in turn,” Raleigh County Prosecutor Kristen Keller said.

Raleigh Sheriff’s Detective Cory Suman wrote in the criminal complaint that the four were reported missing Dec. 9 and that deputies followed family to the entrance of the mine, where they found evidence of “mining wire,” a term for stealing copper wiring.

Williams, who went to authorities Dec. 10, initially told authorities the others went in without him and he went in to search for them, but later admitted the four entered the mine to look for “copper to steal,” authorities said.

Beverly told The Register-Herald that all of their lights had gone out shortly after entering the mine and that, in the subsequent chaos, Eddie Williams left and said he would look for help. Beverly said he stayed with the women, who were panicking.

According to the complaint, Eddie Williams said the pairs separated "to have sex," with he and Treadway going in one direction and Beverly and Kayla Williams going in another.

The three were rescued Dec. 12 by a team from West Virginia Office of Mine Health Safety and Training, Contura Energy and the National Guard.

“People shouldn’t go into a mine. There’s no reason that anyone should be in a mine,” said Raleigh County Sheriff Scott Van Meter told Metro News of West Virginia. “Abandoned mine, active mine, or inactive mine, you shouldn’t be in there unless you work there. There’s no other reason for anyone to ever be in there.”

After their rescue, Beverly and Kayla Williams told reporters outside of Charleston General Hospital, the experience had taught them a major life lesson.

The Register-Herald reports Eddie Williams was indicted in May on charges including trespassing and grand larceny related to the theft of copper wire from an Alpha Resources mine.