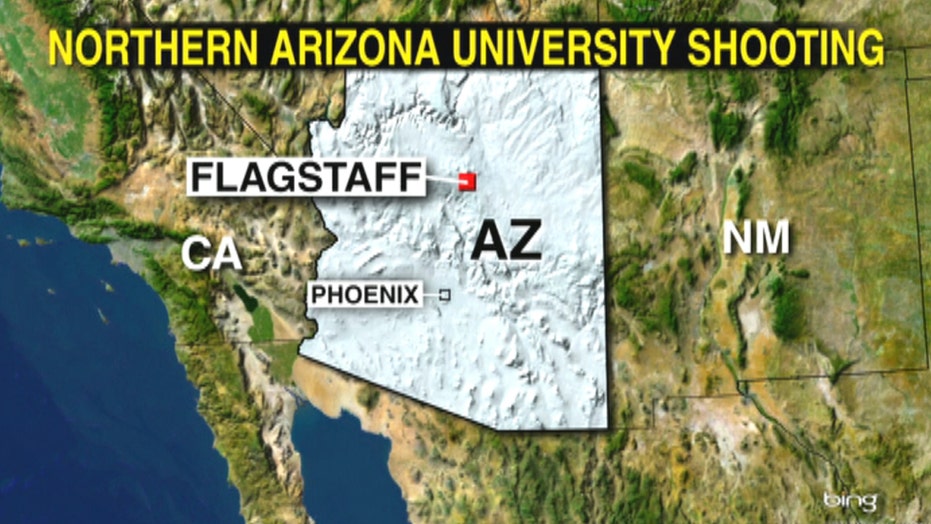 One dead, three hurt in shooting at Northern Arizona Univ.

The four students shot on the campus of Northern Arizona University Friday were all members of the Delta Chi fraternity, according to a statement from the organization. Officials say one student, Colin Brough, died.

The fraternity's executive director Justin Sherman said it was an isolated incident and not fraternity related. Police were still interviewing Jones and he had not been booked into jail Friday morning. They would not say what led to the confrontation that escalated into gunfire.

“Our hearts are heavy,” said NAU President Rita Cheng said Friday. “This is not going to be a normal day at NAU.”

The shooting occurred in a parking lot near Mountain View Hall, a student residence located on the eastern edge of campus near the school's football stadium, Eric Dieterle, a spokesman for the Flagstaff university, told Fox News.


Dieterle said the shooting happened at approximately 1:20 a.m. local time. Mountain View Hall residents received four mobile phone alerts and were told to stay indoors, but the campus was not placed on lockdown.

Fowler said the victims were believed to be shot multiple times and are being treated at Flagstaff Medical Center near the NAU campus, but their conditions are unknown.

“Our thoughts and prayers are with the victims and families,” Cheng said.
Guns are prohibited on campus, per Arizona law, but students are allowed to keep a gun in a locked car on campus.

NAU is a public university with over 27,000 students, about 20,000 of whom are enrolled at the school's main campus in Flagstaff.