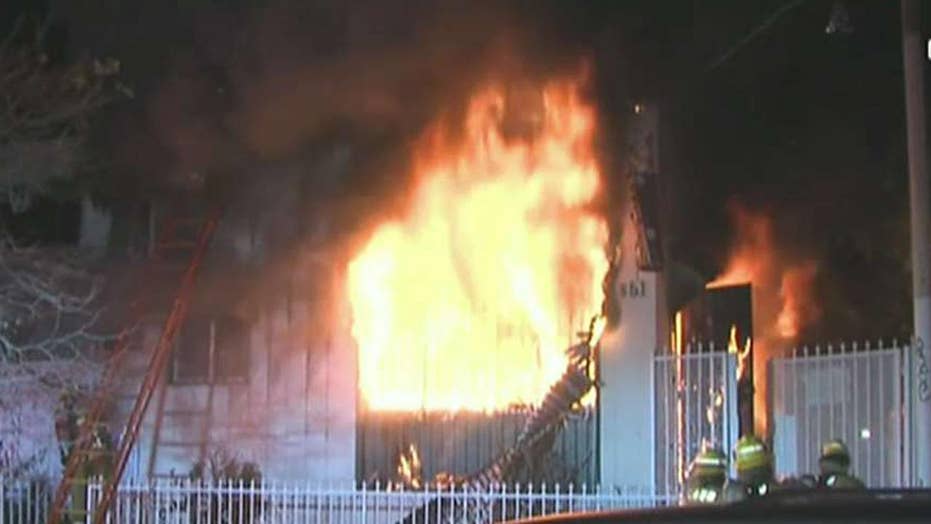 Four children were hospitalized in critical condition after a fire broke out inside a one-story bungalow in Los Angeles Monday night, as video showed flames ripping through the building as crews raced to get inside.

ONE CHILD KILLED, TWO OTHERS INJURED IN DOG ATTACK IN ATLANTA

Rescuers said they were called to the fire in the Vermont Knolls neighborhood of Los Angeles around 10:50 p.m. Monday night. When they arrived, there was heavy smoke and flames shooting out of the front of the home.

Witnesses yelled to the firefighters that people were still trapped inside the bungalow, which was secured with window bars and streel screen doors, the Los Angeles Times reported.

A video of the scene show firefighters sawing into the streel doors outside while flames were seen from outside.

Brian Humphrey, spokesman with the LAFD, told reporters that firefighters found an unbarred window and were able to climb in. He said the firefighters found four children severely burned and passed them to colleagues through the window.

There were paramedics on scene, who worked to revive and threat the children, ranging from ages 2-7.

“Handing the badly injured and nearly lifeless siblings from zero visibility conditions within to waiting colleagues outside, the firefighter was able to escape unharmed before the room spiraled to a temperature that would have assuredly taken the children’s lives,” Humphrey said.

Authorities said the children’s mother was out during an errand when the fire broke out. She came home to see paramedics helping her children.

The children were taken to a local hospital in critical condition.

Nearly 100 firefighters worked to put out the blaze within 16 minutes. The home was 93-year-old and had at least one smoke detector, however, officials could not determine if it was functional.

The cause of the blaze was under investigation. No other injuries were reported.