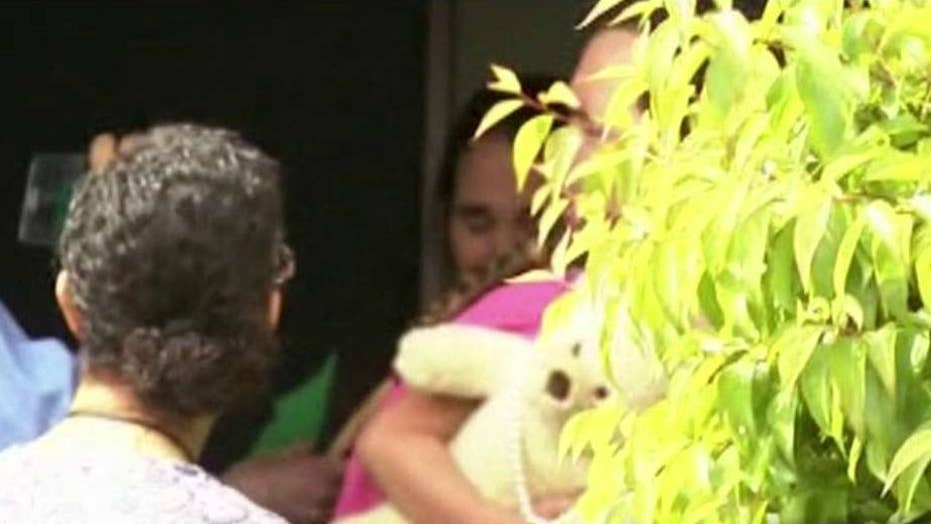 Tears as part-Native American girl is taken from foster home

LOS ANGELES – A California family appealed Tuesday to the state's highest court in their fight to keep a 6-year-old foster child who was removed from their home after a lower court said her 1/64th Native American bloodline requires that she live with relatives.

The family's lawyer, Lori Alvino McGill, filed the request for the California Supreme Court to hear the appeal.

McGill also requested that custody of the child named Lexi be returned to Rusty and Summer Page until the appeal is decided.

The Pages have fought efforts under the federal Indian Child Welfare Act to place Lexi with relatives of her father, who is part Choctaw. The Pages argued that Lexi has lived with them since the age of 2 and considers them her family.

However, a court found that the Pages have not proven Lexi would suffer emotional harm by the transfer.

The Pages have three children and want to adopt Lexi, who was 17 months old when she was removed from the custody of her birth parents. Her mother had substance abuse problems, and her father had a criminal history, according to court records.

Dozens of cases involving foster families have gone to court around the country after the Indian Child Welfare Act was passed in the late 1970s.

Lawmakers found that Native American families were broken up at disproportionately high rates, and that cultural ignorance and biases within the child welfare system were largely to blame.

Lexi cried and clutched a stuffed bear on Monday as Rusty Page carried her out of his home near Los Angeles and Los Angeles County social workers whisked her away in a waiting car.

"How is it that a screaming child, saying, 'I want to stay, I'm scared,' how is it in her best interest to pull her from the girl she was before that doorbell rang?" Rusty Page told KNX-AM radio.

A crowd of friends and neighbors wept, prayed or sang hymns.

Under the transfer, Lexi will live with a Utah couple who are not Native Americans but are related by marriage to her father.

The girl's sister is living with the couple, and another sister will be living down the street, said Leslie Heimov of the Children's Law Center of California, Lexi's court-appointed legal representatives.

"The law is very clear that siblings should be kept together whenever they can be, and they should be placed together even if they were not initially together," Heimov told the Los Angeles Daily News (http://bit.ly/1pYtXlg ).

She said Lexi and the Utah family had traded messages and had monthly visits during the past three years.

"She has a loving relationship with them," Heimov said. "They are not strangers in any way, shape or form."

The National Indian Child Welfare Association said in a statement that the Pages were aware for years that the girl was an American Indian but chose to "drag out litigation as long as possible, creating instability for the child."

The Choctaw Nation said it "desires the best for this Choctaw child."

In 2015, the Bureau of Indian Affairs issued guidance on implementing the Indian Child Welfare Act — clarifying that tribes alone are responsible for determining who is a member.

Wenona Singel, a law professor at Michigan State University, said membership requirements vary among tribes, with some being more restrictive than others.

"The issue is not what degree of Choctaw ancestry a child has," Singel said. "Rather the issue is whether the child is a citizen of the tribe in question or eligible for citizenship."

Singel is a member of a tribe in Michigan.

There is still considerable disagreement over the application of the law and whether it serves children's best interest, said Ralph Richard Banks, a professor at Stanford Law School.

Once a child is placed with a Native American family, it is highly unlikely that the decision would be reversed, he added.

"It would be fairly extraordinary for an appeals court to reverse that," he said.