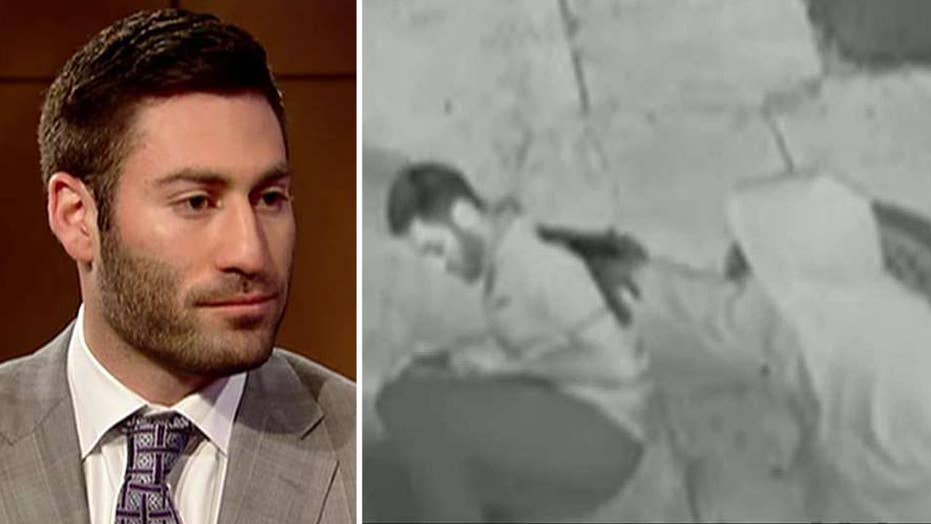 Hero doc shot while stopping attack on woman speaks out

The former Tulane University medical student who was shot two years ago while stopping an attack on a woman recalled his near-death experience that led him to build a foundation aimed at preventing violence.

"I kind of acted in my instincts, and put my faith in the universe. Luckily my story is able to continue," Peter Gold told Fox News' "Happening Now" in an interview that aired Friday.

"My instincts just really took the best of me, and next thing I knew I was out of the car, yelling at the man just trying to do anything to get him to go away," Gold said.

He started yelling at Cain to let go of the woman and leave her alone, but then Cain turned the gun on Gold and demanded money.

“I didn’t have any cash on me, so I tried to offer him my cell phone, credit card," Gold recalled.

Surveillance video on the street captured the incident, showing Gold holding up his arms as Cain threatened him with the gun.

"And he just turned to me and said, 'You know what? I'm just going to kill you,'" Gold said.

Cain shot him in the stomach, then pointed the firearm at Gold's head. But Cain couldn't shoot -- the gun was jammed.

Gold, who was a medical student at Tulane University at the time, was hospitalized for nearly two weeks after the shooting.

Police arrested Cain after DNA evidence linked him to the kidnapping and rape of a tourist couple that happened the next day. He was arrested and pleaded guilty last October to multiple charges, including attempted murder, attempted kidnapping, and rape, People Magazine reported.

Gold was in the courtroom during the sentencing and read a victim impact statement detailing how he felt after the near-death incident and his message for Cain.

"I hope that 50 years from now when you are released from jail, you will use your remaining years to affect young people's lives in a positive way," he said to Cain in the courtroom.

Gold said he now is focused on helping the children growing up in New Orleans who are surrounded by violence.

"When I think about that night and think about how someone can get to the point where violence like that was such ease, it really makes me focus on that kind of problem," Gold said.

He told Fox News his goal is to provide proper resources to underserved kids so they don't resort to violence in the future.

Gold said he doesn't have any physical lasting effects from the shooting thanks to the doctors at Tulane University Medical Center.

As for the woman he saved, Gold said she and her family sent him a handwritten letter thanking him.

"I think both of us are moving on with our stories and recovering in our own ways," Gold said.

"For me part of my recovery is Strong City."