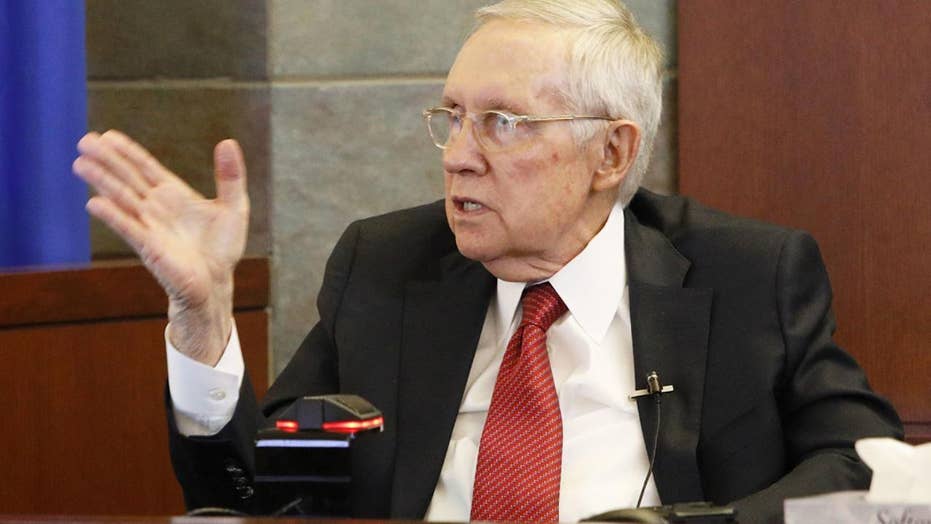 After about an hour of deliberations Friday, a jury in Las Vegas rejected former U.S. Sen. Harry Reid’s lawsuit against the maker of an exercise band that Reid claimed was responsible for injuries he suffered in January 2015.

The injuries included blindness in one eye for Reid, 79, a Nevada Democrat and former party leader who asserted in his lawsuit that his injuries forced him to retire early from the Senate, where he had served for three decades.

The eight-member jury’s decision followed eight days of civil trial testimony, during which Reid never proved that the device he claims he was using when he was injured was a TheraBand made by Hygenic Corp. of Ohio.

Reid's son had disposed of the device soon after Reid was hurt.

The former senator testified that the device slipped from his grasp, causing him to fall, resulting in his injuries.

During the trial, Laurin Quiat, an attorney for TheraBand, said Reid was to blame for his own injuries because he simply misused the product.

The lawyer cited logs from the Office of Attending Physician to point out that congressional exercise advisers tried for months to teach Reid how to improve his technique while using the resistance bands at his doctors’ request, the Washington Times reported.

When he returned to the Senate later in 2015, Reid was seen with significant bruising on his face and initially wore a bandage over his right eye.

Reid said his eyesight loss affected his depth perception and reading ability. Two months after his injury, he decided not to run for re-election in 2016.

Reid was not in the courtroom when the verdict was read. His lawyer, James Wilkes II, said he respects the jury's decision.

The lawsuit had named three companies as defendants: Hygenic Intangible Property Holding Co., the Hygenic Corp. and Performance Health LLC, according to the Las Vegas Review-Journal.

Reid claimed to have incurred more than $238,000 in medical costs because of his injuries, lawyer Colin Esgro, another of Reid’s attorneys, told the newspaper.

Fox News' Gerren Keith Gaynor and the Associated Press contributed to this story.