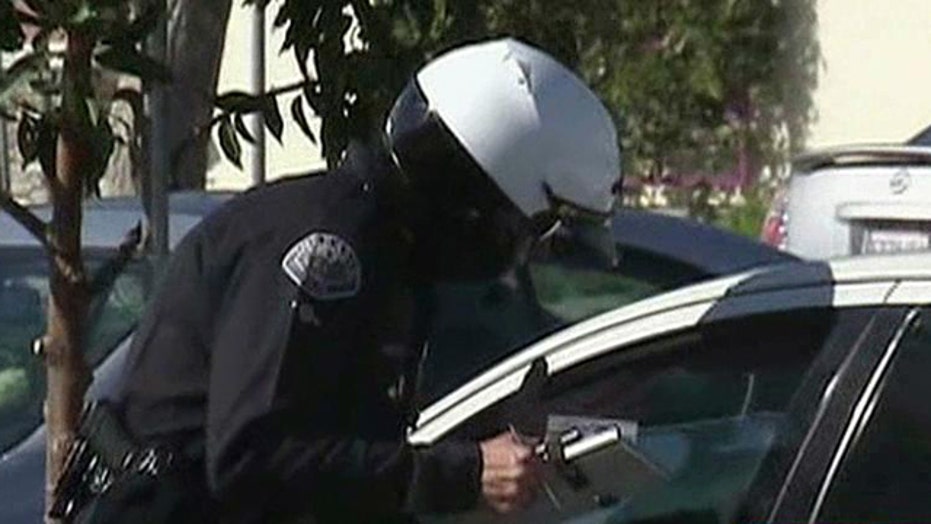 A former Alabama police officer claims he was fired after complaining about a ticket quota, but city officials say the “unfounded accusation” is damaging the entire department.

Justin Hanners, a 30-year-old father of two, claims the Auburn Police Department began instructing its officers as early as 2010 to make 100 contacts per month, with those interactions divided among warnings, tickets, arrest and field interviews. Hanners, a six-year department veteran who was fired in March, said he has audio recordings to prove his claims.

“I stressed a moral objection to the quota,” Hanners told FoxNews.com. “I was then told I wouldn’t get promoted, I would get bad evaluations and ultimately I would be fired.”

Hanners, of Valley, Ala., said his evidence regarding the alleged quota compelled the police department to launch an investigation, but he was later terminated when he continued to pursue the matter after no wrongdoing was found.

City Manager Charles Duggan acknowledged that a quota was “wrongfully conveyed” to at least one patrol shift, but Police Chief Paul Register has reiterated that the quotas do not exist.

“When this was brought to the attention of police administration last fall, supervisory personnel were reminded of the appropriate way to communicate shift duties during the enforcement of traffic laws,” Duggan said in a statement obtained by FoxNews.com. “Chief Register, as well as former Chief Dawson, have made it clear that they do not require quotas in the Auburn Police Division.”

Duggan said police and city supervisory officials have an “open door” policy should any questions remain for police officers.

“For patrol officers, those expectations do include enforcing traffic laws, which does require making contact with individuals on Auburn streets and sidewalks,” Duggan’s statement continued. “Officers make those contacts not in response to quotas, but in response to apparent violations of the law.”

Duggan said the department granted “free reign” to a former investigator with the state attorney’s general to conduct a nearly 700-hour investigation and no wrongdoing was found.

“The real tragedy of an unfounded accusation like the one leveled by Mr. Hanners is the negative impact that such a charge of corruption makes upon the officers we employ,” Duggan’s statement continued. “We have investigated the accusations that have been made and have found them to be false.”

But Hanners said he saw his young career disintegrate after filing a three-page statement on his objections to the alleged quota. Shortly after that filing, Hanners said he was suspended for making crude jokes supervisors claimed he made to another officer.

“It was a message to sit down and shut up,” he said. “But I took my suspension and then went back to work.”

Hanners said he tallied only 67 of the 100 needed contacts during one patrol period last year, but then notched 111 contacts a month later, although the majority of them were field interviews and did not involve tickets. He said other officers shared his concerns on the purported mandate.

“We were beaten down over this ticket stuff and it wasn’t just me,” Hanners said. “If you weren’t writing enough, you would get called out on every little thing you did. You were hassled. But if you wrote a lot of tickets, you’d get promoted and get protected when you made mistakes. It was constant.”

Hanners, still without a job, now plans on taking college courses nearby since he’s known in local law enforcement communities as something like a whistleblower. More than 8,000 people have also indicated their support of Hanners on a Facebook page dedicated to him. He is also considering a wrongful termination lawsuit against the department.

“Once you blow the whistle, you’re done,” he said. “So, yeah, pretty much law enforcement is gone for me. And I was not a problem officer. I swore an oath to the people; I did what I was sworn to do. I just did my job.”