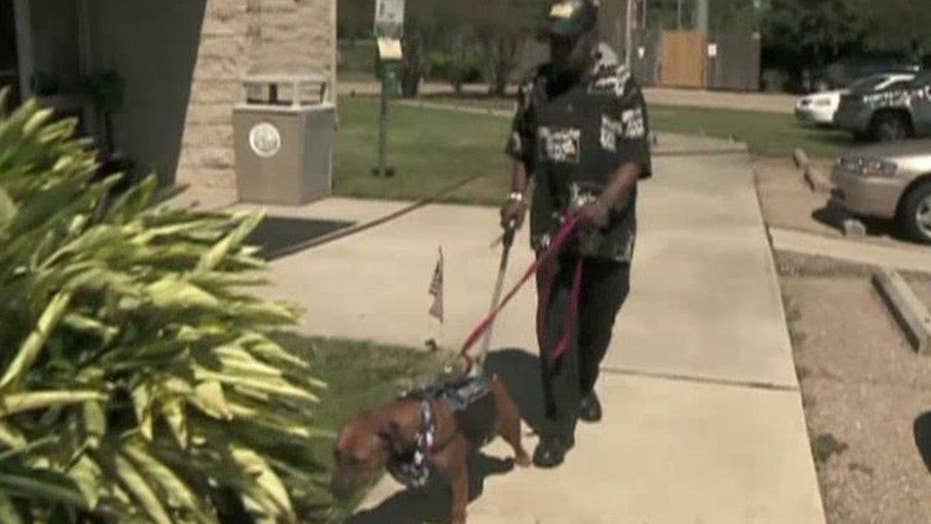 Do service dogs help or hinder vets with PTSD?

He had just returned to the Dallas-Fort Worth area from deployment overseas. And he was falling apart before his family’s eyes.

His low point came as he and his wife, Becky, were awaiting the birth of their fifth child. Becky asked Andrew if he could keep his drinking down — in case he had to drive her to the hospital.

“It was very scary,” Marr’s younger brother, Adam Marr, 32, an army captain who served as an Apache helicopter pilot in Iraq, said. “You see this person, your brother, who you’ve always looked up to, who served in the elite Special Forces — and he looks normal. But he’s not. I was watching him work towards an early grave with his drinking, and I just kept thinking, ‘Rein it in, dude. Stop the drinking!’ But it wasn’t that simple.”

Four months after he returned home, the older Marr brother was in trouble.

“Just months after my return home, I, a 32-year-old once-virile male, was experiencing libido issues,” Andrew Marr told LifeZette bluntly. “We already had four children, waiting on our fifth, and my wife was thinking, ‘We have an enormous problem here. He doesn’t love me anymore.’ I didn’t know what was happening to me. I thought I just needed time.”

In Iraq, his military duties had him working around explosives, but he wasn’t attaching any special significance to that experience — it was part of his service, which he willingly performed. “I was around explosions my entire career and was involved in multiple concussive blasts,” he said. “Now we know that effects of blast waves to the brain give concussion symptoms.”

They were just as intense as the physical, and just as painful for Marr and his family.

"I was having problems with crying in public, and issues with rage," Marr said. "I had panic attacks that left me with depression after they passed. I was having short-term memory loss, too, and vocabulary problems. So I drank, to try to ease all this pain I was feeling."

Along with alcohol, Andrew Marr was on 13 different medications to treat his symptoms — opiates, narcotics, antipsychotics, and anti-anxiety and depression meds, along with "pills to help me wake up, pills to help me sleep," Marr recounted, all prescribed by military doctors.

"We were in the dark," said Adam Marr, who watched helplessly as the brother he idolized got worse. "You return from battle lucky to have your limbs and your life. Our poor mom had three of us in active duty at once for a six-year stretch — and then to fight this other battle? Frustrating, and scary."

Even through his own pain and struggle, the elder brother was determined to find a solution — and determined to help other vets who were going through what he was. He told Adam of his wish to start a foundation, and the two began an "unfocused sort of operation. We knew we wanted to help people, but didn't know how," said Adam Marr. The Warrior Angels Foundation was born.

Enter Dr. Mark Gordon, a Los Angeles neuro-endocrinologist who read an article about the brothers and what they were going through, as well as what they hoped to do for others. Dr. Gordon reached out to Andrew Marr. He said he might have an answer for him.

Desperate for relief, Marr agreed to try treatment. What happened next, many would call a miracle. Andrew Marr said, "When you bring the brain back to its neuro-permissive state, it can then operate correctly. It's hormone therapy — and it's science."

He was referring to individuals who have a TBI, or traumatic brain injury. There are a few things at play in the brain that cause physical symptoms as well as post-traumatic stress disorder, according to Andrew Marr.

"TBI is a two-phase injury," he said. "The first phase is the initial blunt-force trauma — the initial blast wave, in my case. Then there's the second invisible phase: post-traumatic inflammation, or brain swelling. This does not show up in any brain imagery, and swelling can happen a week, a month, a year, even up to 17 years after brain trauma. So symptoms might not show up until years later."

During brain swelling, said Andrew Marr, an individual's hormones are thrown off their proper physiological levels. It might be a minimal shift, hardly noticeable. Or physical symptoms and behavioral issues may surface months or even years later, as they did with him after his return from duty.

He began the hormone therapy right away. The results? A 100 percent cure — at lightning speed.

"I was better within weeks," said Andrew Marr. "Today I'm off all medication — and cognitively, physically, and psychologically I'm performing as good if not better than my pre-injury status."

His complete healing spurred a desire in the two brothers to get their fledgling foundation on track with a clear purpose: They wanted to allow other veterans with TBIs to find the relief the way that Andrew did, through hormone therapy.

Adam Marr stayed right by his older brother's side, his passion for the newly inspired cause matching his brother's. "I turned down a promotion to major in the service for our Warrior Angels Foundation," Adam, who serves as co-founder and COO, said. "I'm too passionate, and it's too close to home. And to think Andrew wasn't even well himself when he started the idea of helping others," he added, with pride typical of a younger brother.

"Our success rate with hormone therapy is 100 percent," said Andrew. "Dr. Gordon has 1300 documented cases who have had the same results I have experienced — 1200 civilians and 100 veterans. How can you argue with that?"

"We want to let veterans know that the therapy speaks for itself through its outcomes," Dr. Gordon said. "One vet we helped had a voice in his head telling him to commit suicide. He entered our hormonal therapy, and within two weeks the voices disappeared completely."

The foundation will help veterans free of charge. Their waiting list is long, but if a vet in immediate need comes forward and can put any money toward the treatment, the foundation will fund the rest. The foundation has streamlined the process to best serve those who need help.

"It's simple," said Andrew. "If you need help, go to our website and fill out the detailed questionnaire. A blood test kit will be mailed to you, and you will be given the name of a lab in your area to take it to. That lab will package it, and send it to the lab we use for testing — one of the world's premiere labs."

After the results are in, the veteran and his family or caregivers are sent a detailed analysis of the results, and have a thorough consult by Skype with Dr. Gordon — or face-to-face, if the vet lives in or near Los Angeles.

The Warrior Angels Foundation understands that veterans caught in the Veterans Administration system may feel hopeless and skeptical of trying yet another approach to healing. But they emphasize that healing can happen.

"Disbelief and distrust permeates the veterans community because they've been taken into a medical model giving them tons of meds, which only accelerates depression and suicidal ideation," said Gordon. "But the proof is in the pudding — we can help you."

The goals of the foundation are clear: By 2020, it plans to have 500 doctors trained in Gordon's protocol for TBI, and they are focusing on getting academia to review their protocols and their successes.

And, of course, they want to keep helping veterans and their families — free of charge.

"The other people who suffer when a vet suffers is their family, and even the greater community, who is without what that vet could bring to the workforce," said Andrew Marr. "We see this as helping military families, and by doing that, helping the country."

Adam Marr is grateful for his brother's return to health and happiness. He urges hurting vets to get in touch through their website, warriorangelsfoundation.org.

"Nobody makes it through this life on their own," he said. "Reach out, and we'll reach back."