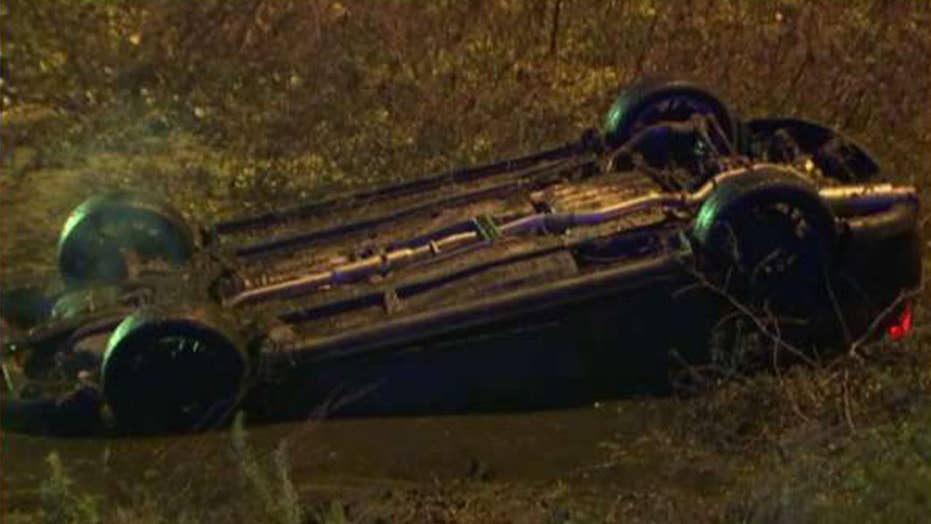 As she sat in her overturned car in the early hours of New Year's Day, sinking into the mud with cold water rising up to her chest, Amanda Antonio had one message for a 911 dispatcher: please help, and fast.

The 20-year-old had been traveling eastbound on Interstate 4 just outside of Tampa just before 4 a.m. when another driver cut her off and she lost control, veering off the highway and overturning in a deep, water-filled ditch.

"It was all really a blur," Antonio told "FOX & friends" on Thursday. "I just remember when I swerved to the right I slipped on the grass and I just started flipping numerous amounts of times. I felt like I wasn't going to stop."

But when she did stop, the 20-year-old realized she was upside-down and wasn't able to kick open the doors to get out.

"I panicked for a second and then I'm like 'ok, so what do I do' because obviously this isn't going to help me," she said.

Hillsborough County deputies in Florida rescued a woman who called 911 after flipping her car into "water and muck" off Interstate 4.

After using her Apple Watch to ping her iPhone that was underwater, Antonio said she called 911, where a dispatcher helped walk her through the situation.

The Hillsborough County Sheriff’s Office released the recording of the dramatic 20-minute call to 911 on Wednesday, where Antonio can be heard gasping for air as water and mud seep into the car.

"There's water getting the car and I can't get out. I'm freezing," she can be heard telling the 911 dispatcher.

The operator asks how deep the water is inside the vehicle, to which Antonio replies, "well, now it's up to my chest."

After trying to help pinpoint her location using Google Maps, Antonio told the operator the water was up to her neck.

"I’m so scared. Please tell them to come faster," she could be heard saying "Please help me. My phone’s dying, it’s at 5 percent."

Deputies from the Hillsborough County Sheriff’s Office were able to find Antonio in the nick of time after spotting the sinking vehicle through thick fog.

Amando Antonio, 20, was in good condition after flipping her car into a ditch just outside of Tampa, Florida, and being rescued by deputies.

Sullivan said that he and another member of the dive team, Deputy Jeremy Pollack, went to the vehicle to try to determine how much of an air pocket the 20-year-old had inside. Once the pair realized they needed to get Antonio out from the driver's side fast, they came across another problem.

"The situation with the mud, there was no prying open the door," he said.

Pollack was able to get over to the passenger side and pry open another door to free the 20-year-old.

"I just want to thank all of you guys for helping me that night and just without you guys there's no way I would have made it out of there by myself," Antonio told her rescuers on Thursday.