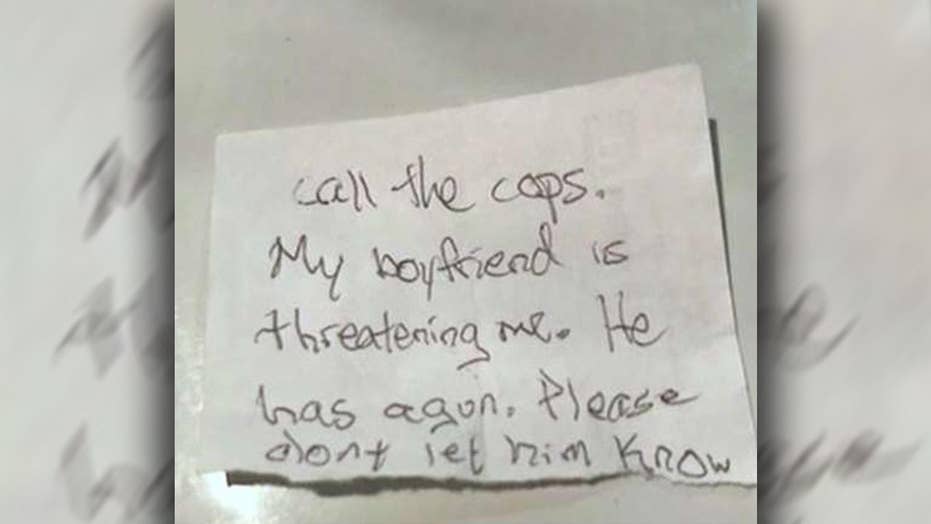 The woman was reportedly held captive for two days.

A Florida woman was rescued Friday after she slipped a note to a veterinarian saying she needed help because her armed boyfriend was beating and threatening her, police said.

Jeremy Floyd, 39, was arrested after allegedly holding his girlfriend, Carolyn Reichle, captive in their home in Volusia County for two days, the Volusia County Sheriff's Office said. The alleged incident began Wednesday when the 28-year-old woman said Floyd repeatedly beat her and threatened her at gunpoint. At one point, they struggled over a handgun that fired inside the house.

Reichle spent the Thursday recovering from a head injury. The next day while thinking of an escape plan, she convinced Floyd, a convicted felon, to allow her to bring her dog to the DeLand Animal Hospital, police said. Floyd insisted on going with her.

“On the drive to the vet, Floyd reportedly again pointed the gun at Reichle, threatening to kill her and her family,” police said.

Fearing for her life, Reichle was able to slip a note to a vet that read: "Call the cops. My boyfriend is threatening me. He has a gun. Please don't let him know."

The vet called police, who responded and took Floyd into custody. Authorities also recovered a handgun.

Reichle was taken to the hospital and treated for her injuries that included a head wound, a black eye and bruises, according to the sheriff's office. Authorities also discovered two bullet holes inside the couple’s home.

He is being held without bail.