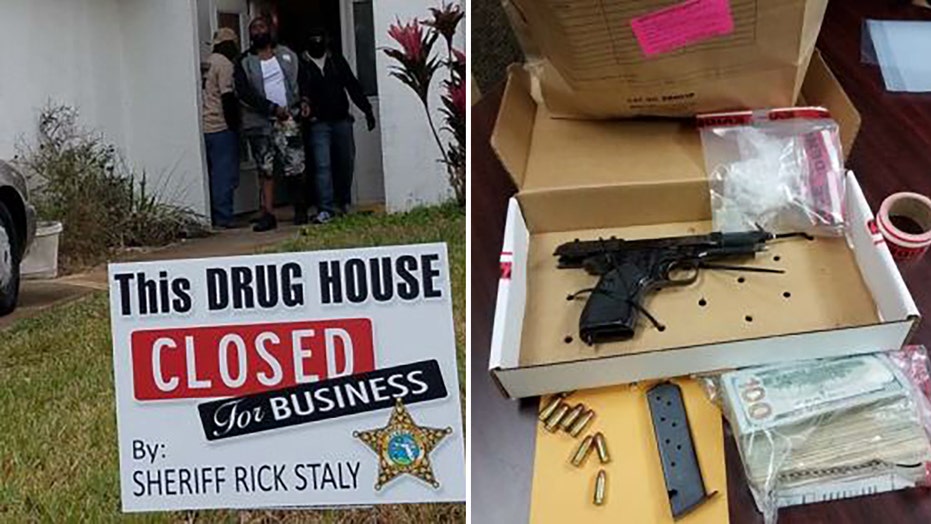 A Florida sheriff planted a sign stating “this drug house closed for business” in front of the home of a suspected dealer as he was taken into custody last week.

The Flagler County Sheriff’s Office (FCSO) released a photo Wednesday that showed Sheriff Rick Staly’s name emblazoned on the sign as deputies arrested 39-year-old Jarian Rahsaun Webb, a seven-time convicted felon, and led him out the front door of his Palm Coast home.

FLORIDA SHERIFF ESCORTS MAN TO JAIL AFTER 'EXTREMELY EMACIATED' DOG FOUND: 'THIS IS HOW WE TREAT YOU'

Webb’s arrest comes at the conclusion of several undercover operations over the last few months, the sheriff’s office said in a news release.  The investigations were launched after residents in the neighborhood complained of suspected drug activity at the home.

During the investigation, detectives witnessed people entering and leaving the home “at all hours” and later confirmed the sale of drugs from the residence, the release stated.

A Florida sheriff planted a sign stating “this drug house closed for business” in front of the home of a suspected dealer as he was taken into custody last week. (Flagler County Sheriff's Office)

The FCSO’s Special Investigations Unit executed a narcotics search warrant and seized half a pound of cannabis, some of which had been packaged for distribution, along with hydrocodone pills, ecstasy pills, a scale and packaging material, the sheriff’s office said. Detectives also seized $4,000 dollars believed to be the profits from narcotics sales.

Investigators also found a loaded 9mm handgun hidden inside an oven. Webb denied knowledge of the gun, the release said, but admitted he knew about the box of ammunition – of the same make and caliber found in the weapon – that detectives discovered elsewhere in the home.

Webb, who lived alone, faces several drug and weapons charges, including possession of a firearm by a convicted felon and possession of cannabis with intent to sell.

He was being held at the Sheriff Perry Hall Inmate Detention Facility without bond. He may face additional charges as the investigation continues.

"Our detectives and the community members who reported suspicious activity did a great job in taking the drugs and this poison peddler off the streets," he said.