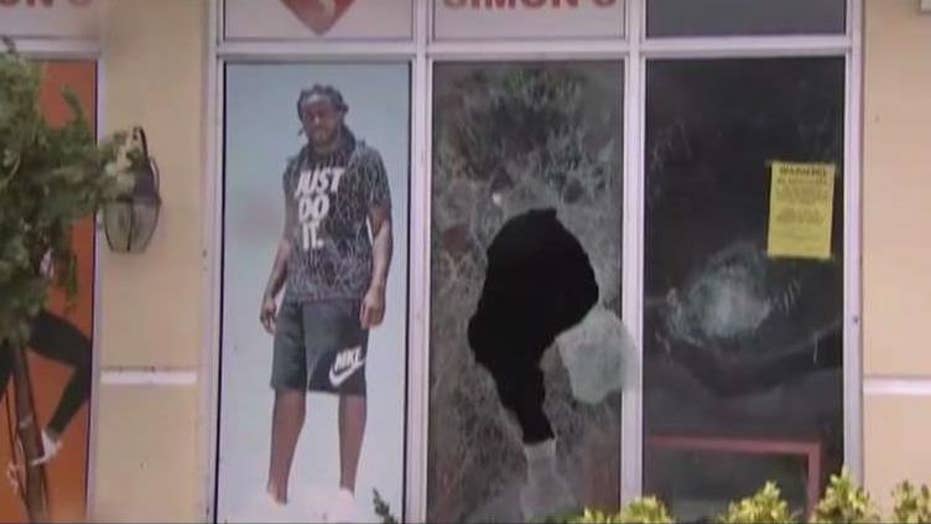 NRA Spokesperson Dana Loesch on how looters in Florida should be dealt with in the aftermath of Hurricane Irma.

More than 50 people in the Miami area have been arrested on charges of looting before and after Hurricane Irma, police said Tuesday.

Among the suspects, 26 were accused of breaking into a single Walmart store, Reuters reported. The incident took place Saturday night in the northern part of Miami, police said.

Another six men were charged with looting in a Miami shopping center and were believed to have taken shoes, bags and laptops, Reuters reported.

Miami police took to Facebook in a bid to deter any other would-be looters by sharing a photo of several accused looters in custody, FOX31 reported.

City officials lifted a 7 p.m. hurricane curfew Tuesday, but officers will be making patrols 24 hours a day to prevent any further thefts, they said.

“Going to prison over a pair of sneakers is a fairly bad life choice,” he said.

"Going to prison over a pair of sneakers is a fairly bad life choice."

Some of the lotting suspects were caught red-handed, police said.

The cameras of WPLG-TV in Fort Lauderdale captured multiple people breaking into a store and walking out with stolen items, the Miami Herald reported. Police later arrested nine people.

Other police departments took to Twitter to warn against criminal activity.

Meanwhile, an unspecified number of prisoners remained on the run after more than 100 escaped from a prison in the British Virgin Islands, the BBC reported.

There was a "serious threat of the complete breakdown of law and order," Foreign Office minister Sir Alan Duncan said, adding that 997 troops in the region were joined by 47 police officers in a bid to maintain order.

Elsewhere, several Caribbean Islands were left with a similar problem as Irma barreled through.

Men armed with guns and other weapons terrorized business owners and even stole from boats carrying relief supplies, reports said.

In some cases, residents have asked governments to send in troops to help stop the looting. French and Dutch police have sent extra officers and military personnel to the small island of St. Martin to help.

Hurricane Irma made its first landfall in Florida on Sunday morning in the Keys as a Category 4 storm, with 130-mph winds, after sweeping through small Caribbean islands, then Puerto Rico, the Dominican Republic, Haiti and Cuba.